Jaipur Pink Panthers had a forgettable PKL 8. The team finished on the 8th position in the league standings. Read on for more information.

After narrowly missing out on a playoffs berth in the last season, Jaipur came into this season with hopes of putting up a better display in this season. The team had decided to retain 6 of their players ahead of the auction for the 8th season, as it was set for a revamp this time around. For a team that has failed to qualify for the playoffs in the last 3 seasons, it was important for Jaipur to prove a point.

Pink Panthers had a poor start to the season, losing 2 out of their first 6 games. The team failed in terms of winning the games consistently and struggled in both the legs of the tournament. And while the team had their moments in the league, it just wasn't enough to ensure them a playoffs berth. Jaipur Pink Panthers finished their league stage at the 8th position on 63 points, winning only 10 out of their 22 games. The inability of the team to win the games in crunch moments costed them big time. 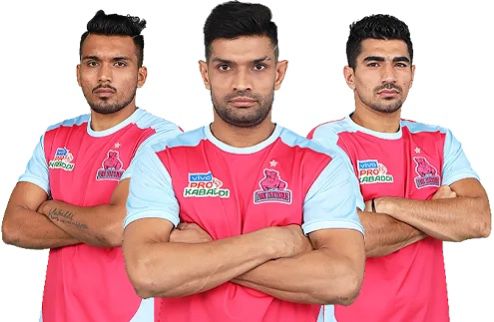 In terms of the performances, Arjun Deshwal emerged as the standout raider for the team in this edition. The raider took the charge in the raiding department for the team, ending up scoring majority of the raid points in most of the games. Arjun also was the go-to player for the Pirates when it came to delivering in the decisive moments of the game. In this edition of PKL, Arjun scored a total of 267 raid points, at an average strike rate of 62.07%, being the 2nd highest in the league in terms of the raid points, ending only behind Pawan Sehrawat.

In terms of the defenders, captain Sandeep Dhull was the most successful defender for the team. The captain took the charge in the defensive unit, and had a good season as well. Sandeep made a total of 112 tackles, scoring 53 tackle points. The defender, playing at left corner, spent an average time of 76.5% on the mat, with an average out rate of 52.81%, also giving an average success assists of 15%.

All said and done, Jaipur's run in this season was disappointing. It had some great potential in terms of the players they had bought and also retained for this season, but over dependence on certain players didn't resulted into success for the Panthers. The team would be hopeful to put up a better display in the upcoming seasons.