A look back at how the defensive specialist team turned into a team led by a young fearless and an unpredictable raiding unit.

Gujarat Giants had one of the strongest starts by any team during their first two seasons of the Pro Kabaddi seasons. They topped their zonal groups on both occasions but ended up losing both the finals to Patna Pirates and Bengaluru Bulls respectively.

But during the third season, the zonal system was scrapped. It became the thorn in their armor. They were pegged right down the table finishing 8th managing just 7 wins in the entire season with 17 losses. 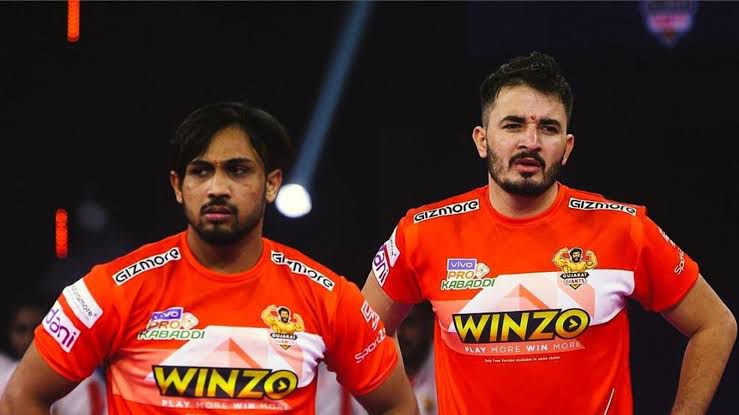 Giants have always been recognized as one of the toughest defensive units to breach and the first thing they did during the auctions was to retain the ace defending duo of Parvesh Bhainswal and Sunil Kumar. They further fortified its defense by roping in Ravinder Pahal, nicknamed the Hawk, for Rs 74 lakh and also signed veteran defender Girish Maruti Ernak.

The raiders were brought in, but relatively lesser-known names than their Super defensive units. Mahendra Ganesh Rajput, Ajay Kumar was brought in with Rakesh Narwal and Young K7 star Rakesh Sangroya completed their Raiding setup.

The defenders were supposed to run the show for the Giants throughout the season. But it was the raiding unit that powered them through into a win in their first game with veteran Grish supporting them from the back.

For the first 9 games, they kept the neutrals and Commentators on their seats. The raiding duo of Rakesh Narwal and Rakesh Sangroya were proving they had enough firepower to rub shoulders with the best in the business.

The younger Rakesh scored his season-high 19 points in a single game against the Steelers almost propelling them to a win single-handedly. He even matched High flyer Pawan Sherawat toe to toe scoring 14 points against his 19.

But the lack of support from the back meant they managed just 3 wins and 3 draws in their first 11 games.

Girish started strongly but faded out which meant Parvesh would take over with Ravinder out with an injury. They were not as solid as their previous season but were doing their best to support the raiding unit who were clearly on the rise.

The reason the giants were always near the playoff spots was their ability to rotate their raiders while some had off days others came up to shine off the bench.

The Rakesh duo had a decline in from but coach Manpreet Singh took them off to ease their pressure. He brought in Ajay Kumar and sturdy Pradeep to replace them. They settled into the lineup with relative ease.

The raiding unit ensured they finish 4th in the Pro Kabaddi season 8 to make it into the play of spots with 10 wins and 5 draws. Rakesh Sangroya was their leading scorer with 140 raid points while Rakesh narwal scored 73 and Ajay scored 78 points to play the supporting role.

But their campaign ended with a heavy defeat against the bulls which showed them the team balance needs to be sorted out before the start of next season if they aspire to reach the top again.