Sahil Jandu, Jai Bhagwan were impressive throughout the tournament 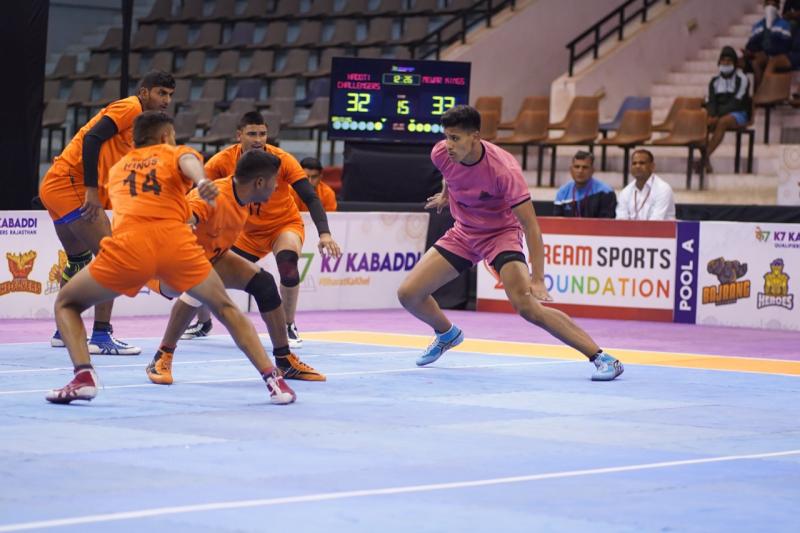 The K7 Kabaddi Qualifiers held in Rajasthan witnessed some thrilling action and skilful moves from the raiders. The young players were top-notch in their quest to book a ticket to the K7 World series. In this article, we take a brief look at the top 5 raiders of the tournament and how the tournament panned out for the budding players.

The Nahargarh Rangers failed to qualify from Pool D but Sahil Jandu's performances on the mat were indeed a silver lining for the team. He had an impressive raid strike rate of 73% and picked up more than 15 points in each of the three matches. Although, the Rangers won 2 out of the three 3 games, Sahil was consistent and scored as many as 28 points in the first match against the Aravalli Guards. He picked 7 points on 'do-or-die' raids the joint-most in the 16-team tourney.

Bajrang Rockers won three out of the three matches in Pool A and Jai Bhagwan's raiding skills was surely one of the prime reasons for their stellar performance at the Sawai Mansingh Indoor Stadium. He had a whopping strike rate of 95.8%. In a close match against the Spartans, Jai picked 28 points in 26 raids, averaging more than a point per raid.

Rakesh Kumar Kuladiya picked 25 and 26 points in the first and third matches. The Guards ended up on the losing side in all the pool matches as they were overdependent on Rakesh and lacked support from the other raiders on the mat. Rakesh accumulated 58 points in the three games in spite of being on the mat 66.86% of the time as his teammates failed to revive him on multiple occasions for longer periods of time.

Nitin Panwar was one of the most consistent raider of the tournament picking up more than 15 points in each of the three games. He was instrumental in leading the Umaid Hawks to the top of their Pool. Panwar picked 57 raid points and was on the mat for 88.8% of the time.

The last raider on the list is Mahipal from JSG Warriors. He picked 55 raid points in the pool games and picked more than 16 points in all the three games. He showcased his all-round ability in one of the matches with 4 tackle points in 4 attempts.