Vikas Kandola was once again the star for Haryana Steelers as they finished off their VIVO Pro Kabaddi League home leg with a thumping 52-32 victory over Telugu Titans in front of a packed audience at the Tau Devilal Sports Complex in Panchkula on Friday.

The match started with both teams opting for an aggressive approach. Titans’ Siddharth Desai and Rakesh Gowda looked eager in their raids while Haryana’s raiding trio of Vikas Kandola, Vinay and Prashanth Kumar Rai were also looking menacing for the opposition defense. But the home side finally pulled open a lead towards the 10th-minute mark of the game thanks to Vikas Kanadola and Vinay contributing through multi-point raids. Haryana sealed their first All-Out in the 11th minute to open up a 4-point advantage. Post the All-Out the Steelers took control of the match with Vikas Kandola impressing with his raids. The raider moved to 9 raid points as the Haryana side inflicted another All-Out with under the 3 minutes remaining in the first half to pull open a 16-point lead. The first half ended 30-12 with Steelers on top.

The home side were in no mood of giving up their momentum in the second half and Vikas Kandola, who secured his Super 10, inspired another All-Out on Titans in the 4th minute to open up a 24-point lead. The trend continued, despite Siddharth Desai picking up a Super 10 for the Titans, as Haryana maintained a healthy lead. Ravi Kumar and Sunil were having a good day on the mat for the Steelers as they dominated the final minutes that also saw Thailand captain Tin Phonchoo make a cameo experience for the Steelers. Haryana crossed the 50-point mark with two minutes remaining and clinched a much-need victory. The result will soothe the hurt ego of the Steelers who were battered by the Bengaluru Bulls and Pawan Sehrawat in their previous encounter.

Match Preview: Haryana Steelers have an eye on the Victory against Titans to finish their home leg in a good note

Steelers have had a bruising home leg, a come from behind lucky win against the Giants a defeat against the Yoddha and a thrashing against Pawan Sehrawat. They will be looking to end the home leg on a positive note and carry some momentum into the playoffs. Titans are out of the playoffs race but if yesterday is any indication, they are not going to be playing a full-strength squad. So, look out for some exciting youngsters trying to set a mark for next season. Last time these teams played each other, will be no indication of how today can pan out given the completely different circumstances. That glorious uncertainties of sport are why we should have to watch this game. For the clash of the youngsters against the veteran Anna. 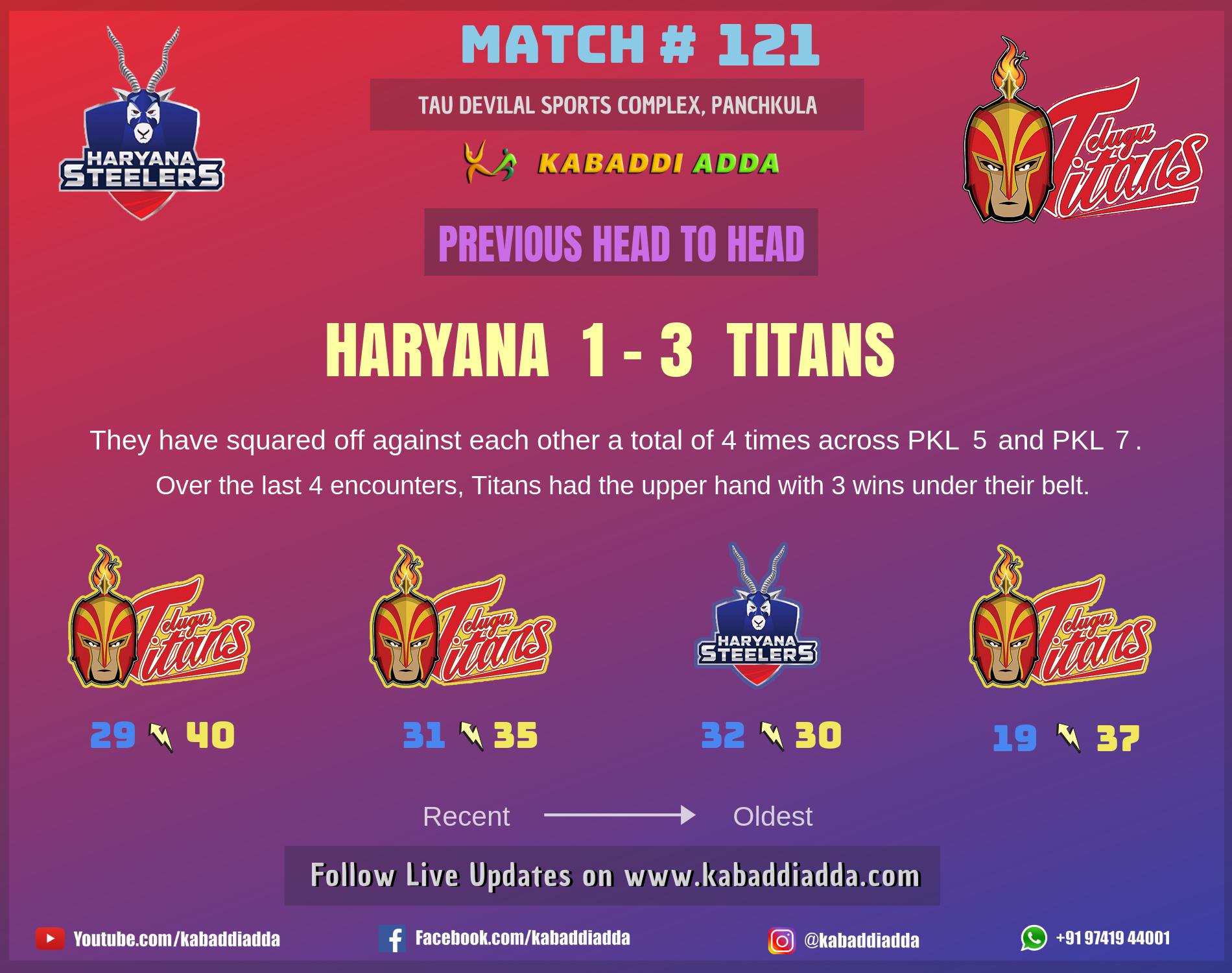