In an epic battle of wits and skill both the teams displayed their talent. Sonu and Rohit Gulia gave Gujarat Fortunegiants a bright start but 'Record-Breaker' Pardeep Narwal helped Patna level the score 5-5 in the fourth minute and also took the lead ahead of Gujarat. But consecutive Super Tackles, first on Pardeep and then Mohammad Maghsoudlou helped Gujarat fight back. More GB was instrumental in Super tackles as well as secured 4 raid points and also super-tackled Pardeep just before the half time whistle. GB More personified his "all-rounders tag" by completing 'Super 10'. Ten points in the first 20 minutes included five raid points, two tackle points, and three bonus points. At the half time, Gujarat Fortunegiants enjoyed a healthy 19-14 lead.

Another successful raid by More GB early in the second half paved the way for Patna Pirates All Out via Rohit Gulia's two-point raid. This gave Gujarat an 11-point advantage. Pardeep Narwal reached his "Super 10" just three minutes later cut the deficit to 7 points and after three successful raids, inflicted the All-Out back on Gujarat Fortunegiants to give his team a one-point lead. The following minutes stayed close as Gujarat sent Pardeep packing through Pankaj's tackle to take lead but Maghsoudlou's two-point raid wrestled the lead back to Patna just moments later. Jaideep's successful tackle on Gulia brought Pardeep back on the mat, who made good use of the revival to get a touch on Ruturaj Koravi and extend Patna Pirates' lead. In the second half, each one inflicted the all-out, however, Gujarat was once again guilty of conceding points at a crucial juncture especially the last five minutes. Even though it seemed like Gujarat had almost won, Patna's Jang Kun Lee came in to replace Purna Singh and immediately picked up a touch and leveled the scores at 33-33.

More GB almost scored a double of " super 10" and "High 5" in a single match  but fell just one tackle point short.

The second "All-Out" that was inflicted on Gujarat by Patna in the last minute, ended the Giants' hopes and Patna Pirates walked away with a six-point win.

In this inconsequential match, you would believe that both these teams will want to get their plans for next season kick-started. Whom will the giants choose to man the corners? Sunil Kumar hasn't played the last couple of games will Amit continue to get a chance. Will Patna rest Pardeep. Last time these teams played Gujarat stopped Patna in a low scoring defensive encounter. Can they repeat their performance? The pirates would like to end the season on a high and want to be better prepared for next season. Time to invest for PKL8 of both Gujarat and Patna, Finally, will Patna rest Pardeep Narwal? Gujarat halted Patna in a low scoring encounter last time, Will Patna overcome a young & raring to go Gujarat? An impatient Patna defense vs Giant Sonu Jaglan, Rohit Gulia will come prepared to notch a few wins as captain. 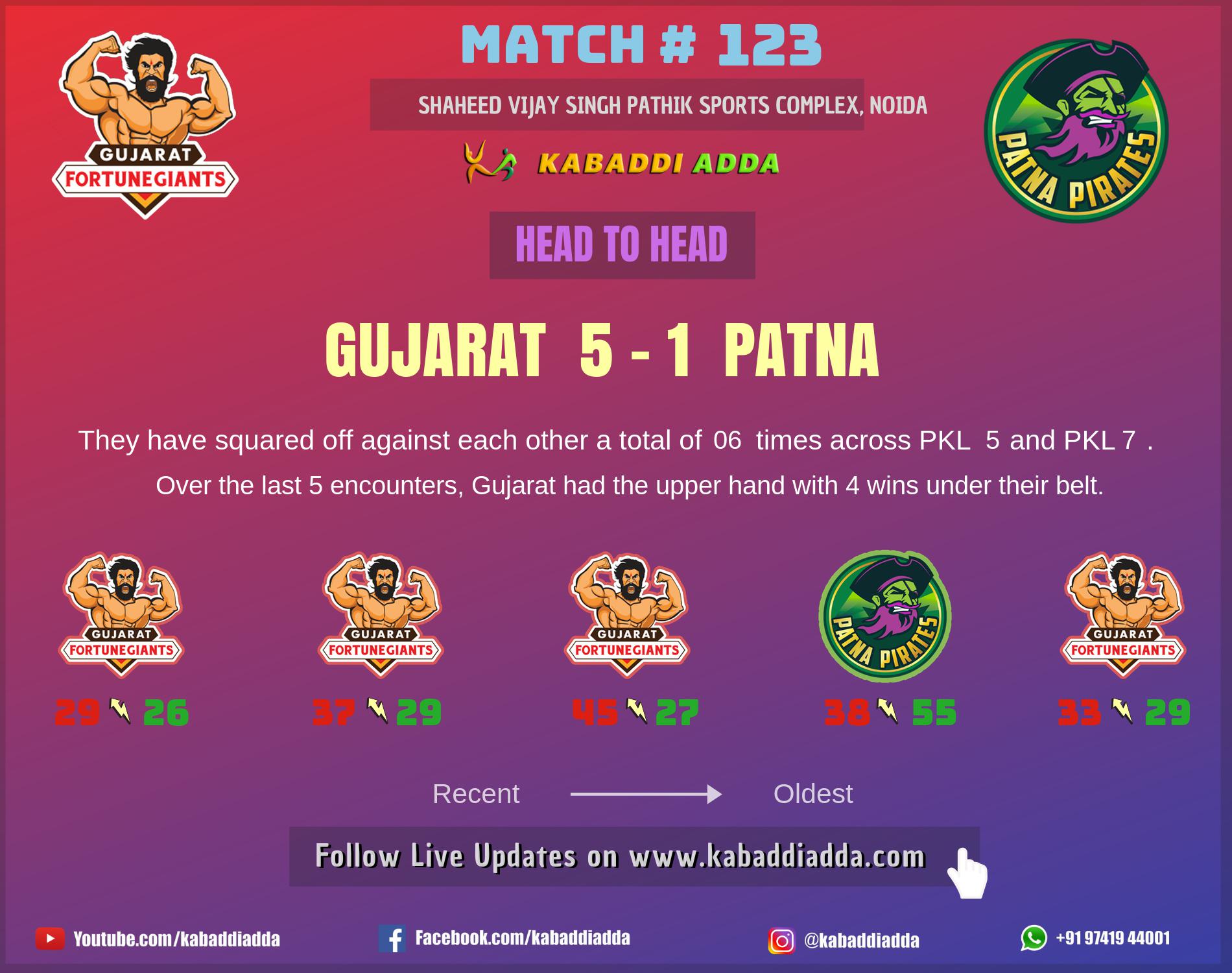