Patna Pirates registered a 28 point win over the Bengal Warriors in their last match of the Pro Kabaddi 2019 at the Shaheed Vijay Singh Pathik Sports Complex in Greater Noida. Patna skipper Pardeep scored 34 raid points to end the Pirates' campaign in the seventh edition of the Pro Kabaddi with a 69-41 win over the Warriors. Patna finished on the eighth spot in the Pro Kabaddi Points Table with eight wins from 22 matches.

Both the teams started the match on the same note with the scoreboard going toe to toe. However, Mohammad Taghi Paein Mahali picked up a two-point raid in the fourth minute to give Bengal a two-point lead. While the Warriors seem to run with the points and increase the points gap, two back to back Super Tackles from Patna gave them a lead of two points. Pardeep then got a five-point raid to inflict the first all out on the Bengal Warriors. Narwal looked unstoppable as he scored at least one point in his remaining first half raids. With just two minutes to go, Pardeep completed his Super 10, leaving just one man on the mat for Bengal and a 27-17 lead.

The second half started with Pardeep inflicting second all out on the Warriors in the very first raid. Warriors fought back as Sourabh Tanaji Patil tried to pick up touch points. But Patna continued to put on a beautiful display of Super Tackles, making it difficult to score for the Bengal team. Pardeep himself got a Super Tackle on Mohammad Taghi Paein Mahali, extending their lead to 40-26. In the 36th minute of the match. Pardeep got six of the Bengal players on the bench in what was one of the most amazing moments of this season. In the last three minutes of the match, Patna inflicted two all-outs on the Warriors to seal the game for them.

With a total of 110 points scored in the match, it broke the record for most points scored in a match in the Pro Kabaddi. The Telugu Titans vs Puneri Paltan encounter on 3rd October 2019 had broken the earlier record. Pardeep scored a total of 36 points, two of which came from a Super Tackle. For the Warriors, Sourabh and Rakesh Narwal each got a Super 10 to their name. The Warriors will play their last match against Tamil Thalaivas on Wednesday, 9th October.

Match Preview: Pirates looks to end their campaign with a win against Warriors

Patna Pirates will be up against Bengal Warriors in the match number 124 of the Pro Kabaddi 2019. It will be the last match of the league for the Pirates and will be looking to sign off this edition with a victory. Bengal, on the other hand, have already sealed their spot in the semifinals. They had defeated Pirates earlier this season and will look to defeat them again to take the top spot in the points table. 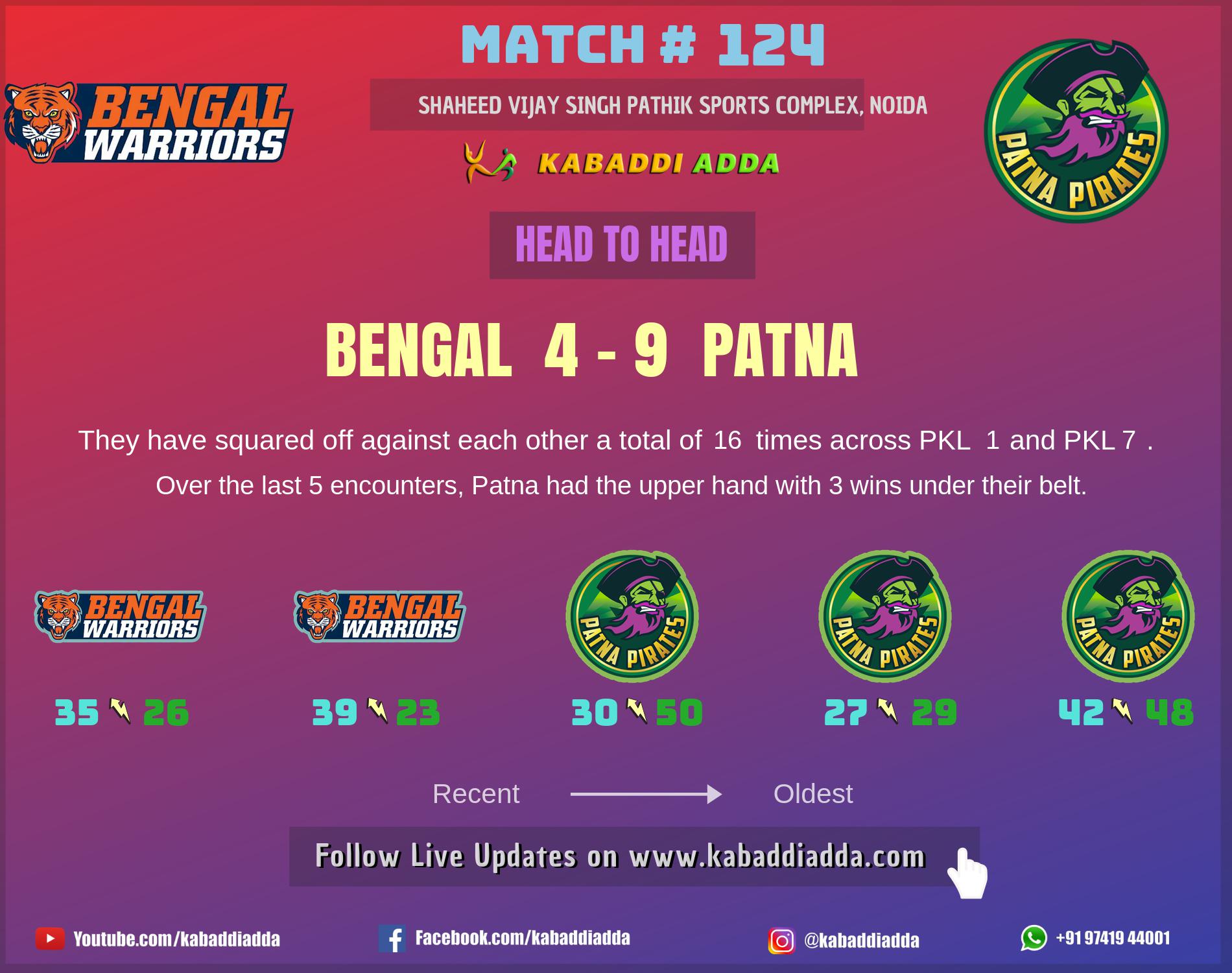