Fazel Atrachali was the star for U Mumba as they defeated Haryana Steelers 39-33 in a closely-fought VIVO Pro Kabaddi League match at the Shaheed Vijay Singh Pathik Sports Complex in Greater Noida on Thursday.

Fazel Atrachali scored 8 tackle points, supported well by Sandeep Narwal, who picked up five, as the Mumbai side secured a victory and the fourth place in the points table. U Mumba also used their reserves very well with young Ajinkya Kapre, a product of the Future Kabaddi Heroes program, impressing with nine raid points.

The match had a slow start with the raiders struggling to influence. Bot the defenses were up for the challenge though and matched each other tackle for the tackle. Both of U Mumba’s corners – Fazel Atrachali and Sandeep Narwal – reached the 300 tackle point milestone in Pro Kabaddi as Mumbai’s defense outscored the inexperienced raiding department. Fazel was particularly lethal for the season two champions, rushing to a High 5 in the 18th minute. But the Steelers’ defense held their nerves to finish the first half at scores 15-15.

Haryana started the second half with more purpose as Vikas Kandola got into the game. The raid influenced an All Out on U Mumba in the 4th minute of the second half to help Haryana open up a 4-point lead. But ‘Sultan’ Fazel Atrachali was in his zone and the defender picked up tackle points at will, supported at the other end by young Ajinkya Kapre. Together, they inflicted an All-Out on Haryana to open up a 4-point lead of their own in the 9th minute of the match. Vinay secured a Super 10 for Haryana but it was Mumbai who dominated the dying minutes of the match. Fazel continued racking up tackle points while at the other end Dong Geon Lee and Ajnikya Kapre continued to impress. The Mumbai team had a 4-point lead entering the final minute of the match and their defense held firm to clinch a morale-boosting victory.

Very important game for both franchises towards getting a favorable draw in the playoffs. Will Steelers choose to read any of their key players? Will U Mumba bring Arjun Deswal back to help him get some form before the playoffs? These teams have a history of playing tight encounters, So given the upcoming battles, both teams will want to get one up on the other.

Head to head: U Mumba vs Haryana Steelers 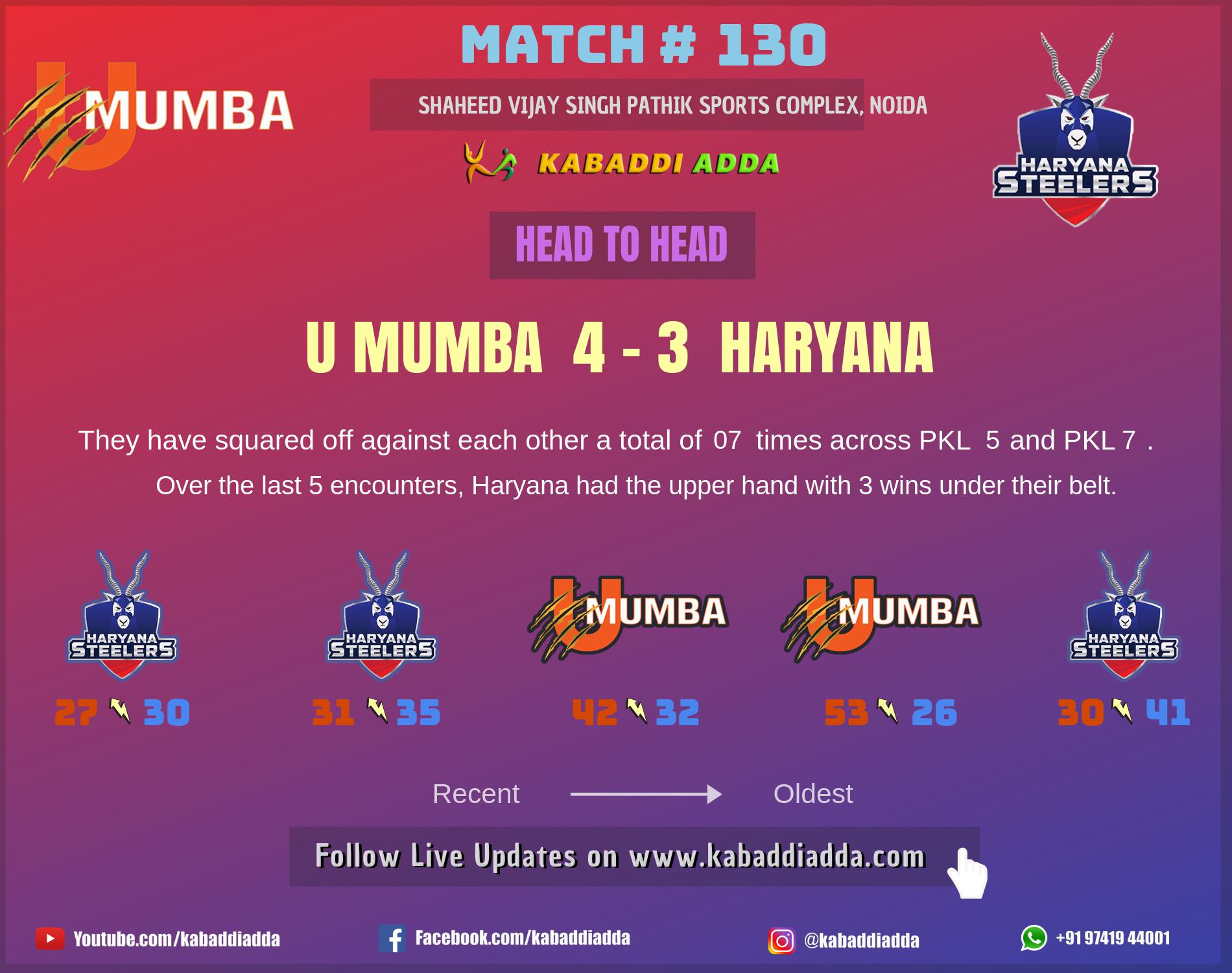