Dabang Delhi continued their stellar performance in Pro Kabaddi 2019 as they won their 13th match of the season 37-29 against Telugu Titans at the Shree Shiv Chhatrapati Sports Complex in Pune. Naveen Kumar was the star for the Delhi team yet again as Delhi completed a double whammy against the Titans this season. Siddharth Desai's Super 10 was not enough to take Telugu Titans over the line, with them still sitting in second last position in the Pro Kabaddi Points Table.

Desai started off the game with three consecutive successful raids, giving his team the early lead into the game. However, Naveen Kumar, Chandran Ranjit and Vijay too put on a good show from the opposite side and reduced the Titans to three men on the mat within seven minutes of the first half. The Titans pulled off two Super Tackles, courtesy Rakesh Gowda and Abozar Mighani to extend their lead, sending Naveen back both times. Ravinder Pahal's tackle on Siddharth Desai and Naveen's two point raid though reduced the Titans to just one player, leading to an all-out on Telugu. Farhad Milaghardan produced a two point raid as he sent two main Delhi defenders Ravinder Pahal and Joginder Narwal on bench, reducing the score gap to three points at the end of the first half.

The second half also started with Siddharth Desai picking up touch points on the Delhi defence, trying desperately to give his team the lead in the match. But Delhi’s raiders kept doing inflicting damage from the other side of the mat and soon a second all-out was inflicted on the Titans with 11 minutes remaining in the match. In the 34th minute, Naveen completed his 14th consecutive Super 10 (previous record was 8 from Pardeep Narwal) as Delhi led 33-23. The gap then kept on increasing as the time on the clock dropped, making it impossible for the Titans to stage a comeback. It was Titans' second loss against Delhi this season, having lost the earlier match by just one point.

Naveen Kumar was the star of the match as he went on to pick 12 raid points. It was his 14th Super 10 this season, the most by any player in any season of Pro Kabaddi.

Delhi continue to be on top of the points table with 69 points while the Titans are way behind in 11th spot with just 30 points on the board. Titans will be playing against Patna Pirates this Friday, while Delhi will be traveling to Jaipur for their next encounter against the Bengaluru Bulls.

Telugu Titans will be up against Dabang Delhi in the match number 94 of the Pro Kabaddi 2019 in Pune. Titans did not have a good run this season but still, have a minor chance of making it to the playoffs if they win the rest of their games. However, with the form Delhi are in, it will be a tough challenge to overcome for the Titans. In their previous meet this season, Delhi had registered a close 34-33 win and they have been unstoppable since then. 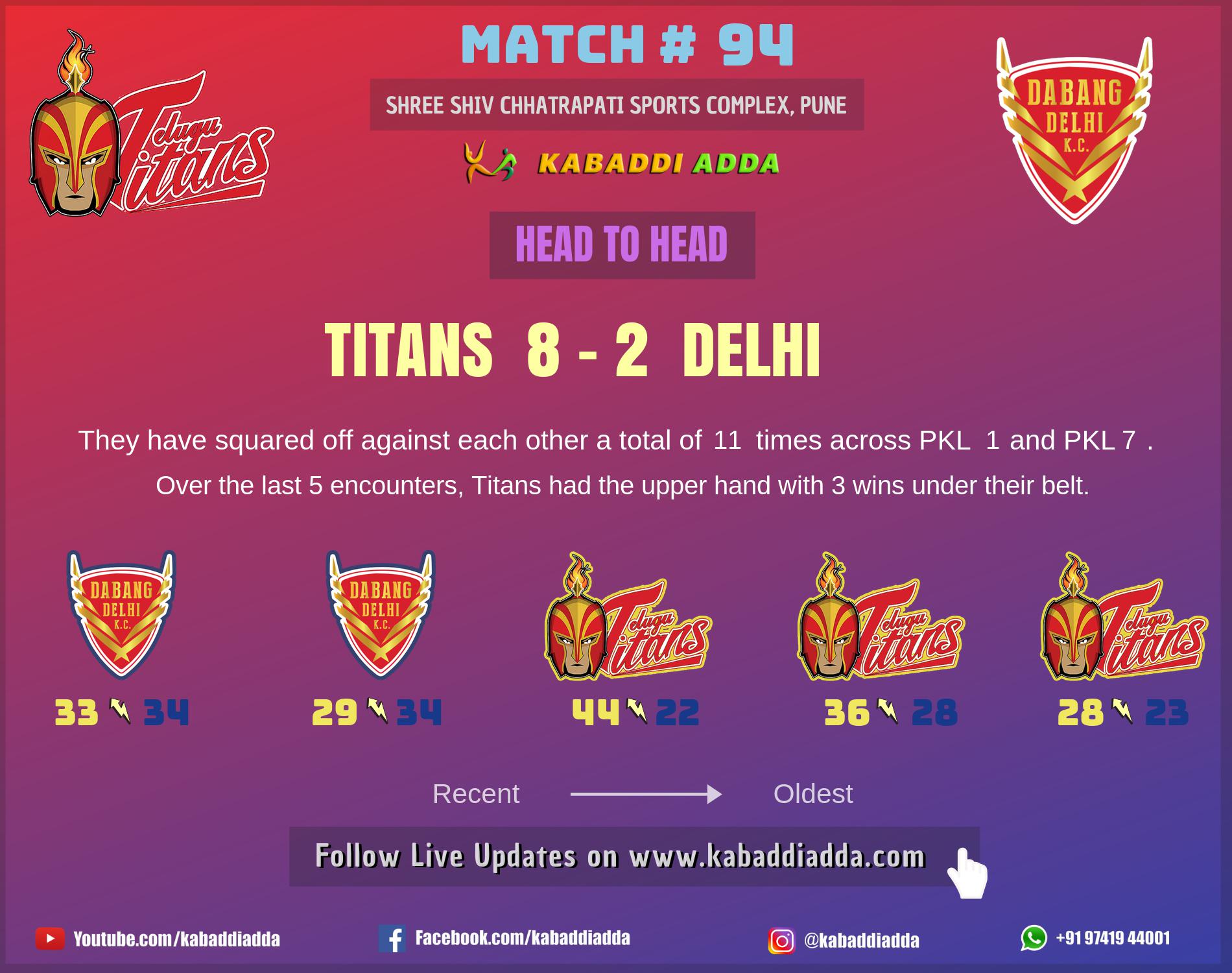