The second match of PKL8 is between the teams that finished 11th and 12th - Telugu Titans and Tamil Thalaivas. Tamil Thalaivas have played 3 seasons of Pro Kabaddi and finished at the bottom 3 times. This is the year to redeem some pride in the sport for the team from the South.

Telugu Titans also don't have much to boast about, as they have finished in the bottom 2 for the last 3 years. But we strongly believe Titans have a squad to put up a fair show this year.

The best left corner in Pkl 2 with 70 points in 16 matches has come back to the Titans after 6 years. He has continued performing brilliantly for services; has the ability to stop Tamil raiders Manjeet and Prapanjan.

Although as a raider Rohit might be on the decline, he has the ability to groom young stars like Pardeep Narwal and Pawan Sehrawat. Aided with a powerful raider like Siddharth Desai, and young guns like Ankit Beniwal and Rajnish, captain Rohit can bring out the best in them.

Surjeet Narwal, while being one of the country's best covers, doesn't have much to boast off as a captain. Santhapanaselvam and Sagar Krishna really haven't left a strong presence in the defense in the previous seasons.

All in all, Telugu look all set to kick start their campaign strongly. 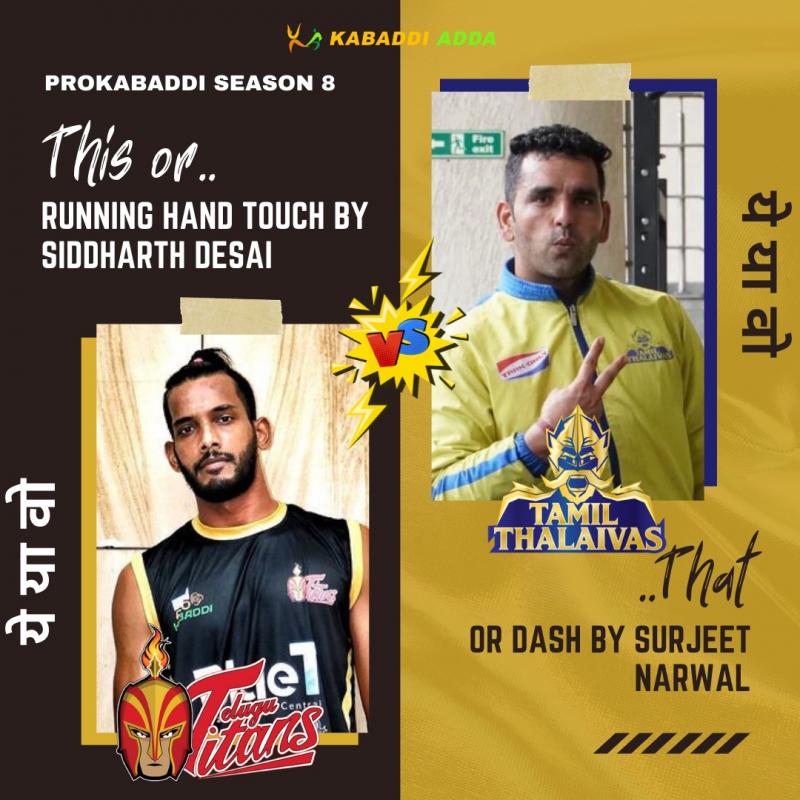 Players to Watch out

The two teams have been struggling at the bottom of the table in the last three PKL seasons. This match will be key to redeem hope for both these teams. Telugu will hope that Siddharth Desai is able to give their campaign the boost it is looking for. It will also be an opportunity to watch Sandeep Kandola back in action paired with dynamic cover Surinder Singh.

All in all, Telugu look all set to kick start their campaign strongly.

We have chosen Prapanjan, Siddharth Desai and Keralite MS Athul as our raiders; with Prapanjan as captain given the weakness in the Telugu right corner. And Desai usually has a slow starts to his PKL seasons.

When it comes to defenders, we have chosen one the most audacious covers Surjeet and Telugu corner Ruturaj Koravi. The star left corner for Telugu comes in the all-rounder section - where we have included Sandeep Kandola and Ankit Beniwal.