Telugu Titans outperformed Tamil Thalaivas to clinch the match 35-30 in a VIVO Pro Kabaddi League encounter at the Sree Kanteerava Stadium in Bengaluru on Monday. Siddharth Desai picked up nine raid points and Vishal Bhardwaj continued with his impressive marshalling of the defence with six tackle points for the Titans as they saw out a spirited fight by the Tamil Thalaivas led by young Ajith Kumar who finished with a Super 10 (13 raid points) to his name.

Tamil Thalaivas, on the back of a demoralising defeat against arch-rivals Bengaluru Bulls on Sunday, started the match with a changed line-up as youngsters Ajith Kumar and Anand found a place in the starting seven. But it was Rahul Chaudhari, chasing a milestone of 900 Pro Kabaddi points, who started the raids for the Thalaivas, looking to do a double over the Hyderabad team (the Thalaivars had won the previous encounter between the teams). But it was the Titans who started the match brightly, Siddharth Desai and his brother Suraj Desai securing important raid points. In fact, both sets of defence struggled to get a stranglehold of the match as raiders picked up easy points in the initial stages. Ajith Kumar was the star for Thalaivas, picking up seven raid points in a closely contested first half that also Manjeet Chhillar making uncharacteristic mistakes in the defence for the Chennai team. Rahul Chaudhari clinched him 900-point milestone in the last raid of the first half though as the teams went into the break with Titans leading Thalaivas 16-12. 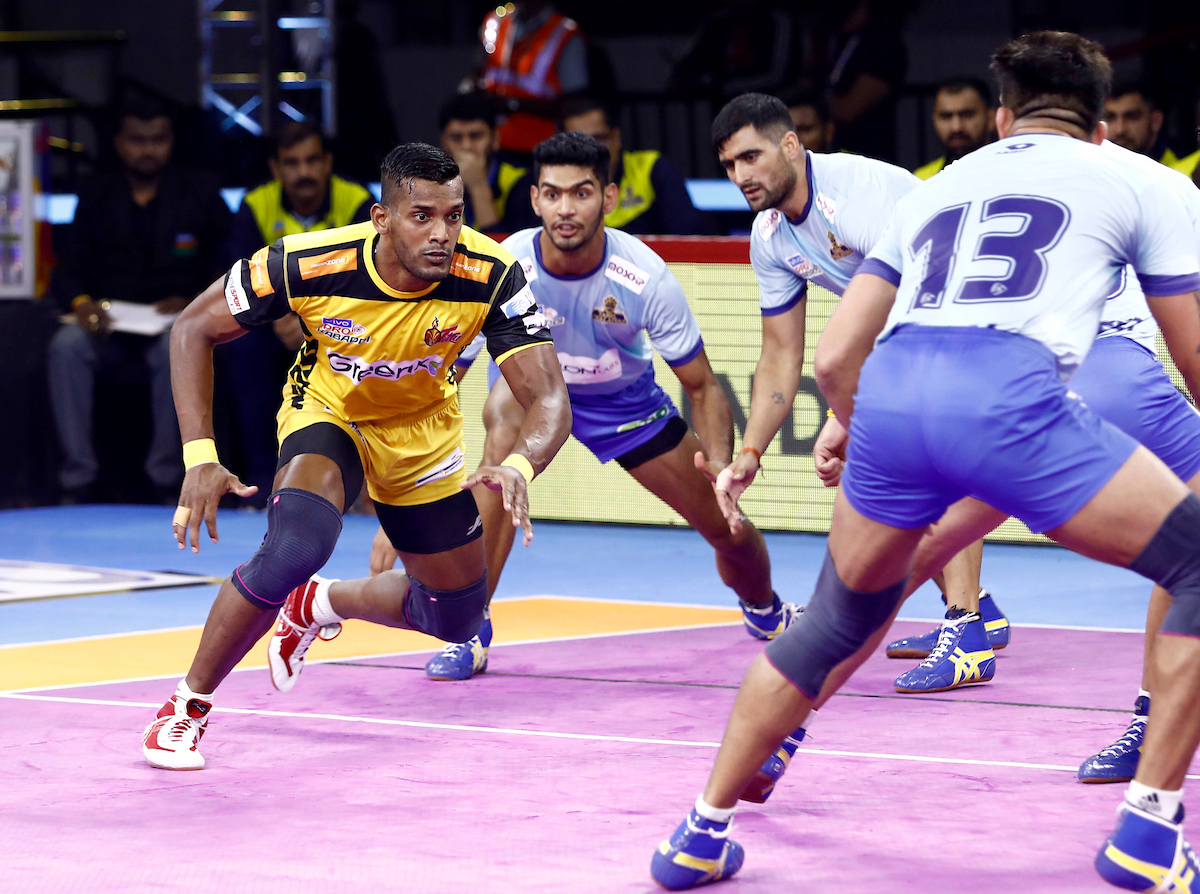 The Thalaivas started the second half positively, riding on Ajith Kumar’s raiding brilliance, but the error-prone defence kept leaking unnecessary points to make it difficult for the Chennai-based unit to close the gap. Armaan took over some of the raiding duties for the Titans as they opted to rest the Desai brother in the mid periods of the second half that was a see-saw battle between the two South Indian sides. Vishal Bhardwaj raced to a High 5 but even the Titans’ defence was leaking points, with substitute Shabeer Bapu quickly picking up points. Despite the wealth of experience in their ranks, the Thalaivas looked a disjointed team – a case of too many cooks spoiling the broth maybe – as Titans forced an All-Out with less than 4 minutes remaining in the match to build a nine-point lead. Ajith got to his Super 10 in the final minutes and ensured the Thalaivas lost with a margin less than seven points but coach E Bhaskaran will be left with a lot to wonder as his side suffered a fifth straight loss.