UP Yoddha produced an all-round performance to beat Puneri Paltan 43-39 in a VIVO Pro Kabaddi League match at the Shaheed Vijay Singh Pathik Sports Complex in Greater Noida on Sunday. Captain and lead defender Nitesh Kumar, with a High 5 (6 tackle points), was the star for the UP team as they clung on to the match despite a late effort from the Pune side to stage a comeback.

Even though the home side had secured a place in the season seven playoffs, they played with more passion on the mat against a Puneri Paltan squad that lacked motivation. The dropped shoulders of the Pune players showed signs of an unhappy camp and the UP side, despite resting some senior players, were quick to pounce on the opportunity, inflicting an All-Out in the fifth minute of the match. The trend continued as Rishank Devadiga, Monu Goyat and Surender Singh picked up easy raid points against a Pune defense that lacked cohesion. In the defense captain Nitesh Kumar picked up four points for UP in a first half that saw the home side inflict another All-Out with three minutes remaining for the break. The first half ended 29-15 with UP well on top.

Puneri Paltan started the second half with a much better attitude and got their rewards immediately when Manjeet’s two touches fetched them an All-Out in the third minute. With the margins reduced to 6 points, Pune tightened their defense, to match UP Yoddha's move for move. UP’s Nitesh Kumar secured his High 5 in the fifth minute of the half but both teams failed to open up a healthy lead. Surjeet Singh and Amit Kumar picked up High 5s for a massively improved Pune defense as they leveled the points with under 3 minutes left in the match. Rishank Devadiga managed a two-point raid in the penultimate minute of the match and the home side followed it up with a successful tackle on Nitin Tomar to open a three-point lead. Amit Kumar’s successful two-point raid in the last minute gave UP a lead and they went on to seal the match from there.

Last encounter: UP Yoddhas and Puneri Paltan: Yoddhas get the better of Paltan, courtesy Shrikant Jadhav | 35-30

Match Preview: Puneri Paltan faces UP Yoddha as the last encounter of the season

Puneri Paltan to play the last match of the season against UP Yoddha. Puneri Paltan have heavily invested in Nitin Tomar but it turned out to be a disappointment. besides the investment Puneri Paltan have got players like Pankaj Mohite and Manjeet who will be future Pawan Sehrawat and Pardeep narwal and others in defense. UP Yoddhas are qualified for playoffs and Puneri Paltan will be looking to finish their journey of season 7 on winning note. if we look into past clashes between UP Yoddha and Puneri Paltan, they have been a balanced opponent, both have played 4 matches, both teams are on level win 2 wins each.

Head to head: UP Yoddhas vs Puneri Paltan 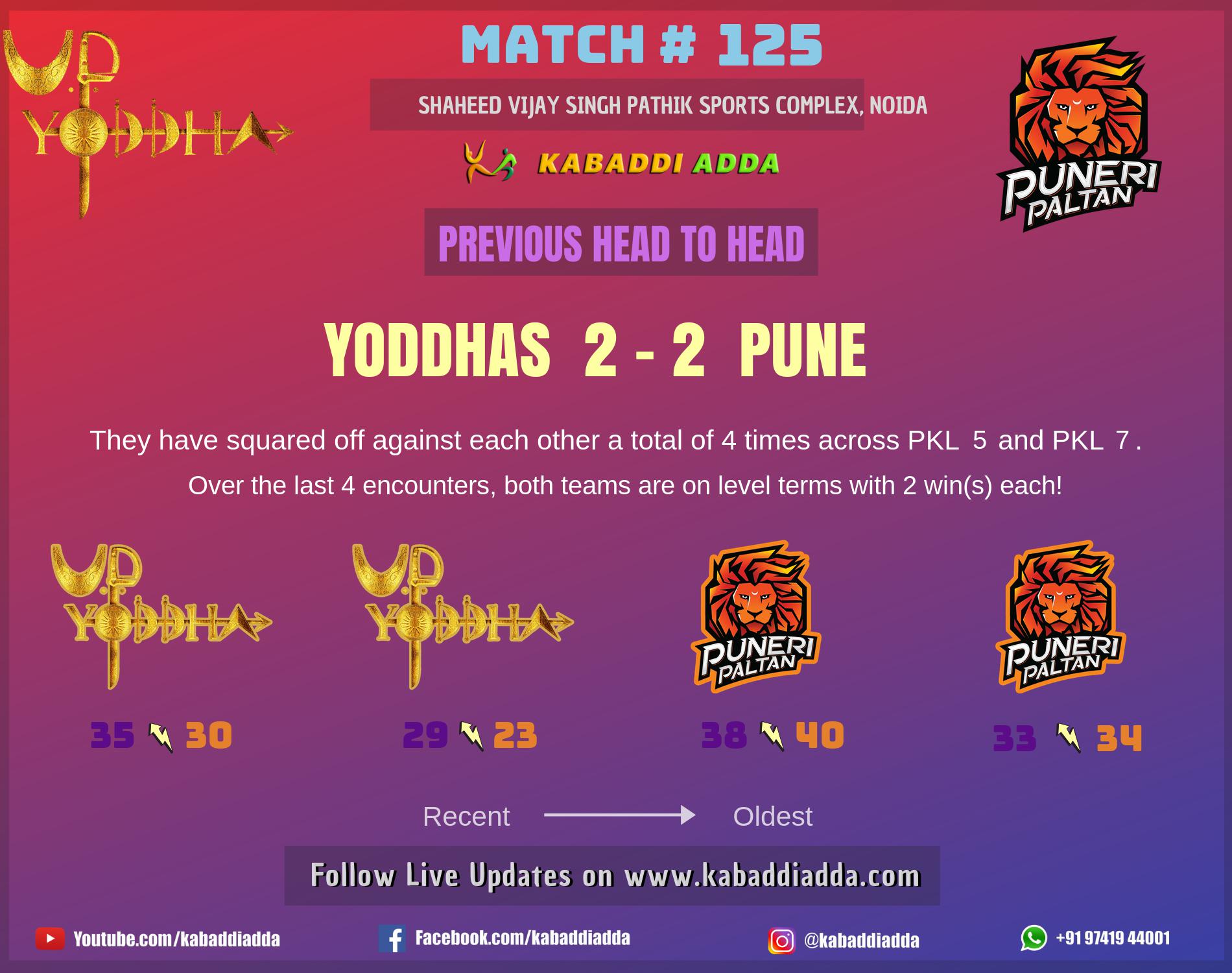