A wonderful raiding display by Naveen Kumar in the 2nd half and defensive efforts from corners Ravinder Pahal and Joginder Narwal helped Dabang Delhi register a fine win over U Mumba by a scoreline of 40-24. The atmosphere at the Thyagaraj stadium was set on fire as the home team romped to their 3rd straight win, becoming the most successful team in a Home leg this season, with 3 wins out of 3!

The start of the game was all going towards the U Mumba side as they gained the early lead at 4-0 in the initial 3 minutes. But the home side showed just why they head the Pro Kabaddi Season 7 standings and embarked on a run that reduced U Mumba down to three men. After this, the Delhi side was able to inflict an all-out and gained the momentum they needed for the rest of the match. This ignited the fire inside the U Mumba team and they started to counter-attack but Delhi maintained the edge over the U Mumba side, and held a lead of 3 points into the break with a scoreline of 14-11.

Dabang Delhi K.C. started the second half in dominant fashion and scored four unanswered points to reduce U Mumba down to just two men quite quickly. Similar to the first half, after being reduced to two men, U Mumba's side went through their second all out of the match and the damage was done on the season 2 champions. The star raider of the match was none other than the invincible Naveen Kumar who scored another Super 10, his 8th in row, tying the record for most consecutive Super 10s with Pardeep Narwal from Season 5. The defense was rock solid with corners Ravinder Pahal and Joginder Narwal scoring High 5s and joining the party. Thus, with the brilliance of the corners and The Naveen Express, Dabang Delhi inflicted their third all out of the match and closed out the match 40-24 to continue to top the leaderboard in PKL 7.

Dabang Delhi have been unbeatable at their home- ground since the beginning of the tournament. Both the teams have squared off each other a total of 14 times across all the seasons. Considering the last 5 encounters U Mumba have the upper hand with 4 wins under their belt. Can U Mumba defeat the table toppers tonight ?

Head to head: Dabang Delhi vs U Mumba 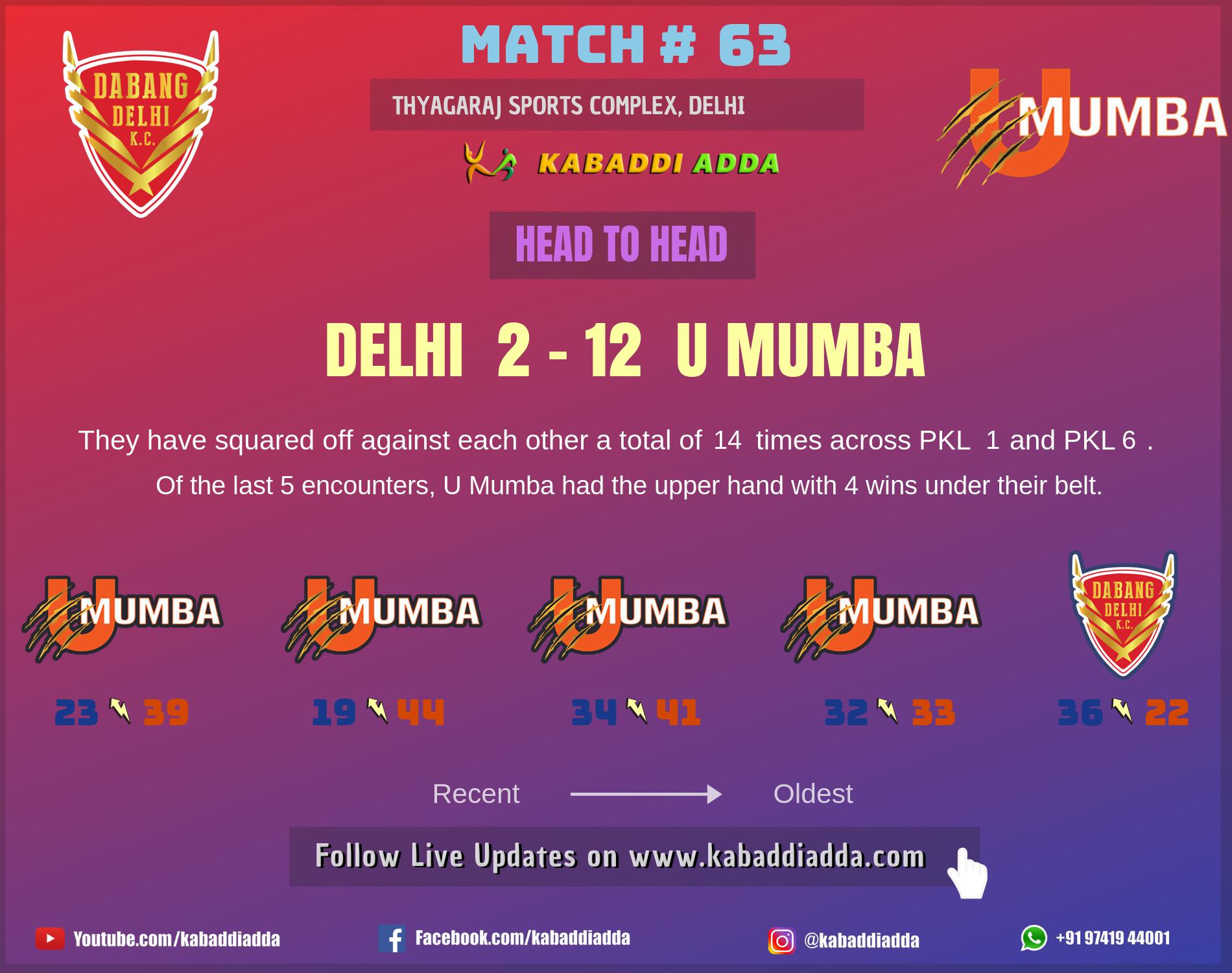