Dabang Delhi beat Bengaluru Bulls with a score of 38-44. Dabang Delhi enters into the Finals for the 1st time in the history of PKL. Season 7 has seen many record-breaking performances and many surprises, this is one of them as Dabang Delhi defeated defending champion and get through finals.

Dabang Delhi started well as Chandran Ranjit did a multipoint raid in 1st raid itself and Daband Delhi defense dominated on Pawan to keep him off the mat. It was 5 minutes past in the match when Delhi inflicted 1st All-Out on Bulls. Pawan did a Super raid as soon as he was back on the mat but this didn't last long as Delhi inflicted 2nd All-Out on Bulls in another 8 minutes. Naveen scored his 21st Super 10 by sending Ankit and Mahender out of the mat. The last 3 minutes of 1st half was left when Saurabh Super Tackled Naveen and scored 1st tackle point on Bulls. In the next raid, he got revived as Dabang defense tackled Rohit Kumar. Naveen again came to raid and motive to inflict 3rd All-Out in the first half took Naveen out of the mat as he spent more than 30 seconds in the raid and awarded 2nd Super Tackle to Bulls. Al the end of 1st half scored was 18-26 in the favor of Dabang Delhi as Bulls did 12 unsuccessful tackles.

The defense of failed to revive Pawan Sehrawat, defending champions loses in semi-finals.

Also watch: How Delhi Dabang K.C sealed their spot in the grand finale after a 44-38 win against Bulls

Naveen Kumar once again got Super Tackled in the starting of 2nd half by Mahender and Pawan revived who scored his Super 10 by sweeping both the corners out of the mat. Both the teams slowed down the match and started playing on Do-Or-Die raids. The last 5 minutes were left when the score was 26-34 when Pawan got tackles and Naveen once again awarded Super Tackle points to Bulls by stepping out of the mat in a Super Tackle situation. Dabang Delhi inflicted one more All-Out on Bulls in the last 3 minutes of the match. Pawan once again got tackle and Bulls had no one to save the way to finals.

Pawan and Naveen shine as both teams settle for a tie!

Match Preview: Two hotshot raiders going up against each other | Pawan Sehrawat vs Naveen Kumar

Dabang Delhi and Bengaluru bulls have had closely fought encounters in the past. Dabang Delhi who have been at the top of the table for the whole season whose 19 year old sensation is playing against the Hotshot star of the last two seasons Pawan Sehrawat. Naveen Kumar has had the support from his team in the form of Ravinder Pahal, Joginder Narwal, Chandran Ranjeet and Vishal Mane but Pawan Kumar has got the Bulls to Semi-Finals single-handedly. Will Pawan Sehrawat get through to Finals?

Which defense unit will shine against star raiders of the league? Is it the day for Amit Sheoran and Saurabh Nandal or Ravinder Pahal and Joginder Narwal? Its all about handling the pressure in a knockout game, which team will get through the pressure and qualify for Finals?
As Pawan's momentum goes high to more than 75% in last 10 minutes, Naveen is also very quick to take the bonus and hand touch points throughout the match, who will have an upper hand today? We will have to wait and watch. 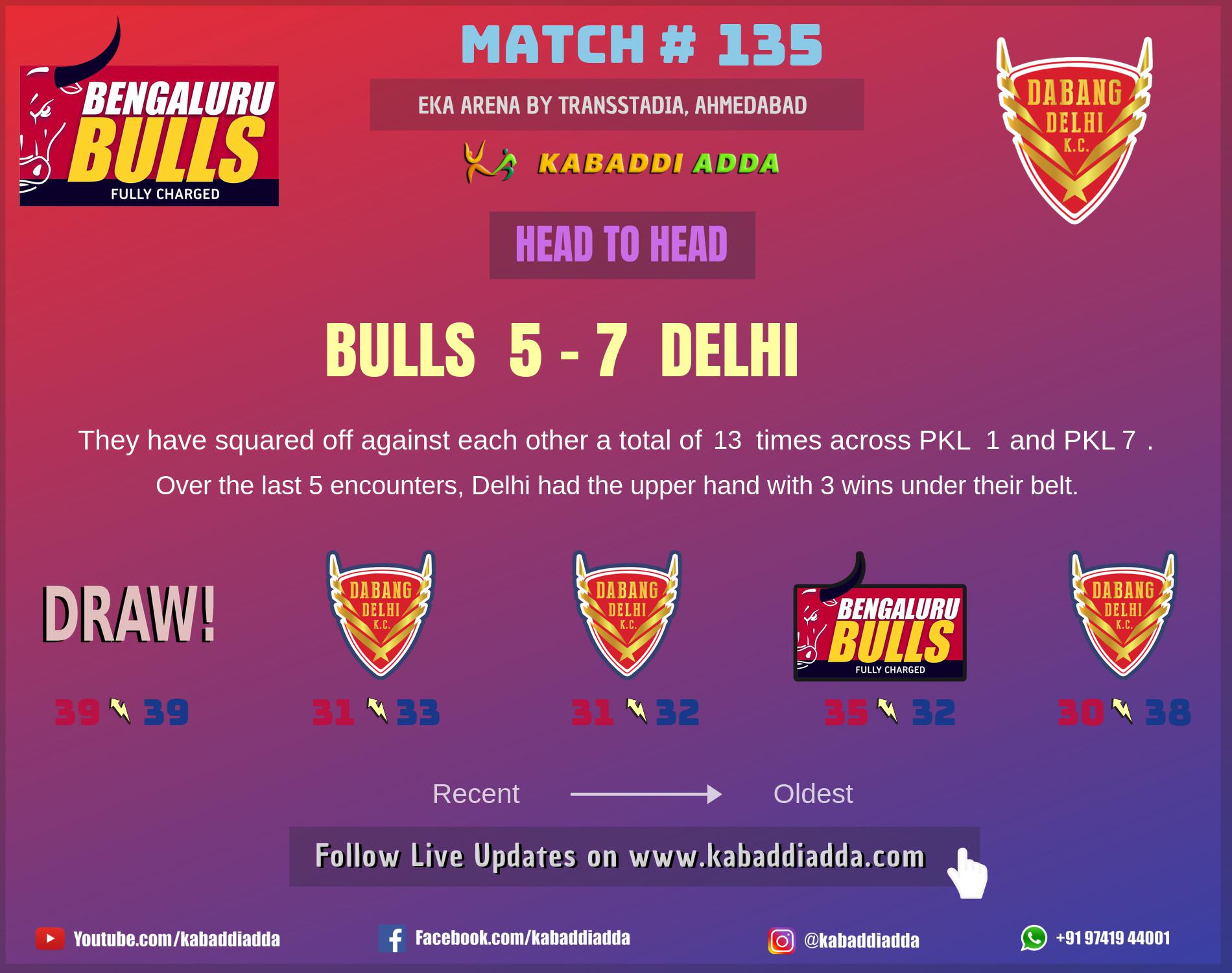