Warriors defeat Mumba with a score of 35-37 in a closely fought encounter. As soon as the team announced U Mumba got surprised when they saw Maninder the captain and lead raider was not a part of the playing team because of injury. Warriors enters into Finals to fight with a deserving team Dabang Delhi KC.

Bengal Warriors and U Mumba started off by giving a neck to neck fight till starting 12 minutes of the match with a leveled score of 9-9. In the thrilling fight, Warriors inflicted 1st All-Out on Mumba and took the lead. At the end of 1st half score was 18-12 in the favor of Warriors.

Also watch: How Bengal Warriors cemented a spot in final after a 37-35 victory against U Mumba

2nd half started with more strategies when Sukesh Hegde swept Fazal, Ajinkya, Yong, and Surinder out in a Super raid. Sandeep was the lone player left on the mat who saved an All-Out with his lion Leap jump. Soon Warriors inflicted one more All-Out on Mumba by sending Abhishek out of the mat. It was the last 7 minutes Warriors had an 8 point lead on Mumba when Rinku Super Tackled Abhishek, then Ajinkya came as game-changer raider who sent Mayur, Jeeva, Prapanjan and Sukesh out in a Super raid and reduced the score margin by 29-33. Abhishek scored Super 10 by inflicting an All-Out on Warriors in the last 3 minutes. It was only 1:40 time was left when Mumba tackled Nabibaksh and leveled the score with 35-35. U Mumba's lack of strategy cost them a loss as Warriors enters into the finals to face Dabang Delhi on 19th October.

Bengal Warriors win a last-minute thriller against U Mumba

Match Preview: How will instrumental Maninder Singh and Prapanjan get past rip-roaring U Mumba defense

Bengal Warriors and U Mumba have squared off against each other a total of 13 times across PKL1 and PKL 7 Over the last 5 encounters Bengal Warriors have an Upper hand with 3 wins under their belt and they have won it with smallest of margins. Effect and return on the court when Maninder went out of the court with an injury on the shoulder which was a dislocation, as Maninder is back to play post-injury, question arises if Maninder is fit to play against the most dangerous and attacking defensive unit of the season includes Fazel Atrachalli, Sandeep Narwal, and Surender Singh. If Maninder can fire it will be good for Warriors but If Maninder isn't in the form then it will be beneficial for U Mumba to get through.

Covers for Bengal are shaky and mistakes have been very prominent by Rinku and Baldev in the last few matches, given this situation Abhishek and Arjun Deswal of Mumba can rollover the covers and enter to Finals? Will Nabibaksh be able to shine out of the defense of Bengal?
When Mumba is good they playout the best but this time they are up against Maninder, Prapanjan, and All-Out savior Sukesh Hegde, will Mumba have a plan against them as this season U Mumba has lacked behind Warriors.

Head to head: Bengal Warriors vs U Mumba 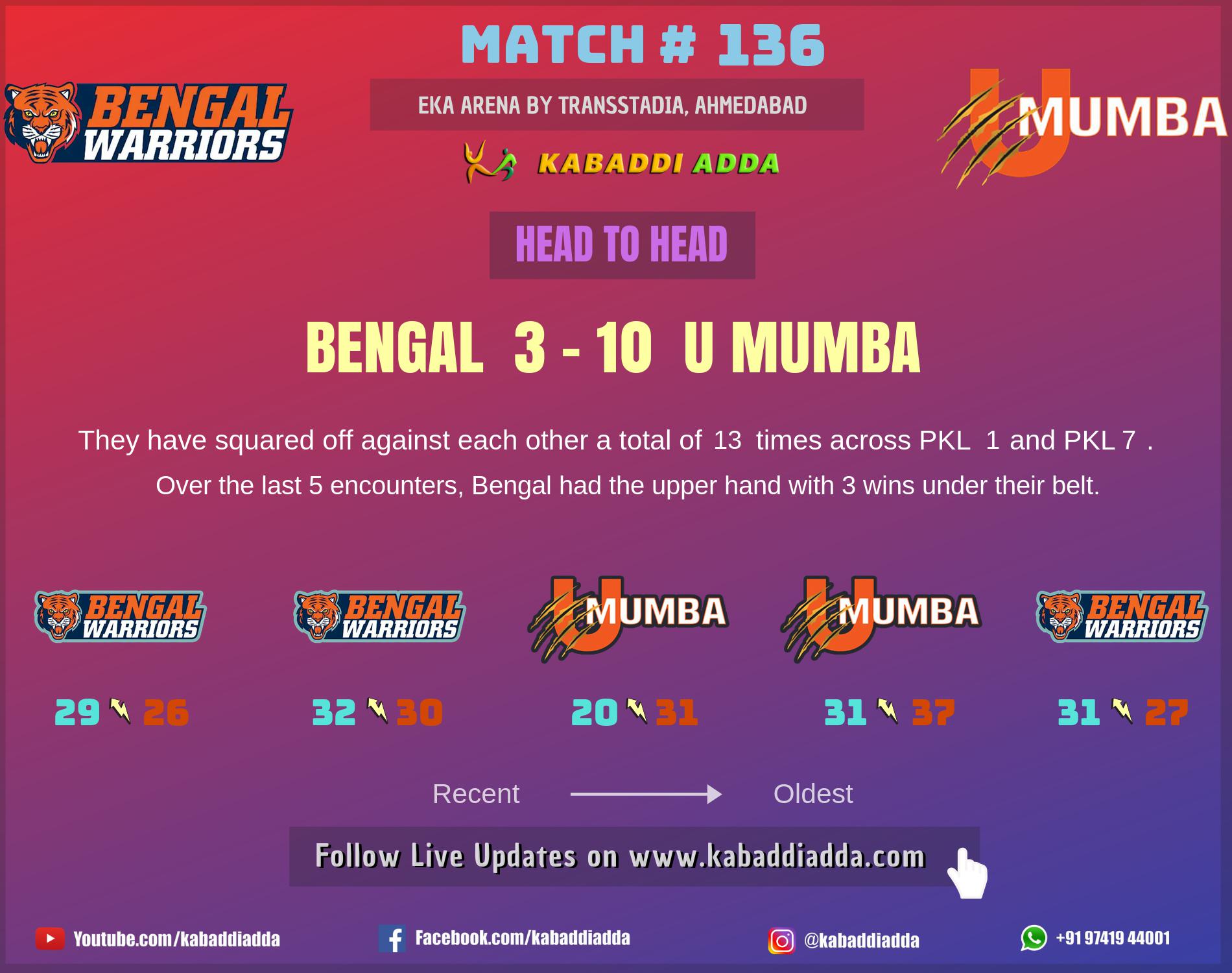