An intense 40 minutes of kabaddi goes in the lap of Dabang Delhi against two-time finalists Gujarat Fortune Giants. The Fortunegiants made an unbelievable comeback in the second half after trailing in the first half, but all this went in vain as Dabang Delhi had the final laugh.

The first half of the match was one-way traffic as Dabang Delhi had the upper hand. The league-leaders were off to a fine start and raced to a 4-1 lead courtesy of a raid point each from Vijay and Naveen Kumar and a couple of tackle points from Ravinder Pahal. Tackles from Vishal Mane and Joginder Narwal reduced Gujarat Fortunegiants to three people on the mat and Naveen took care of all three in a five-point Super Raid to inflict an all-out and give Dabang Delhi K.C. a seven-point lead in the first half itself. The game was evenly poised for the next few minutes but Chandran Ranjit's touchpoint on Parvesh Bhainswal reduced Gujarat Fortunegiants down to three men and in the final raid of the half, Naveen scored two more touchpoints to extend his teams lead to 11.

The second half of the match was an edge of a seat thriller which was full of ups and downs. In the very first raid of the second half Dabang Delhi inflicted an all-out and took an immense lead of 14 points. The next seven minutes belonged to Gujarat Fortunegiants as they enjoyed their strongest spell of the match. It started with Gulia's two-point raid followed by Pankajs tackle on Naveen which cut the deficit to 11. Sachin's touchpoint followed by a self-out for Ranjit reduced Dabang Delhi K.C. to just two men on the mat. Gulia made short work of the two defenders on the mat, getting a touch on both and inflicted an all-out.

Even after a wonderful comeback by Gujarat Fortune Giants they didn't make a win.

With under four minutes left on the clock, the difference between the two sides remained at two, however, Naveen's 10th raid point of the night and Joginder Narwals successful tackle gave Dabang Delhi a four-point cushion. Gujarat Fortunegiants finished the game with two successive points, but it meant little as Dabang Delhi stood victorious by four points.

Gujarat is one of the only two teams to have beaten Delhi this season. Can they get back to form by pulling off an unlikely win? Gujarat's most recent win was against another lead right raiders Pawan's bulls. Delhi, if they get a win or a tie will have a >75% chance of qualifying without getting any further points. Delhi raiding now has got another dimension with Meraj also striking form. Gujarat will have their hands full if they want to qualify here onwards. Needing a win or a close defeat. In 15 games this season Gujarat have conceded 1 point lesser than Delhi have conceded in 14 games, so expect a low scoring encounter in a game of attrition. Which right raider will shine through? 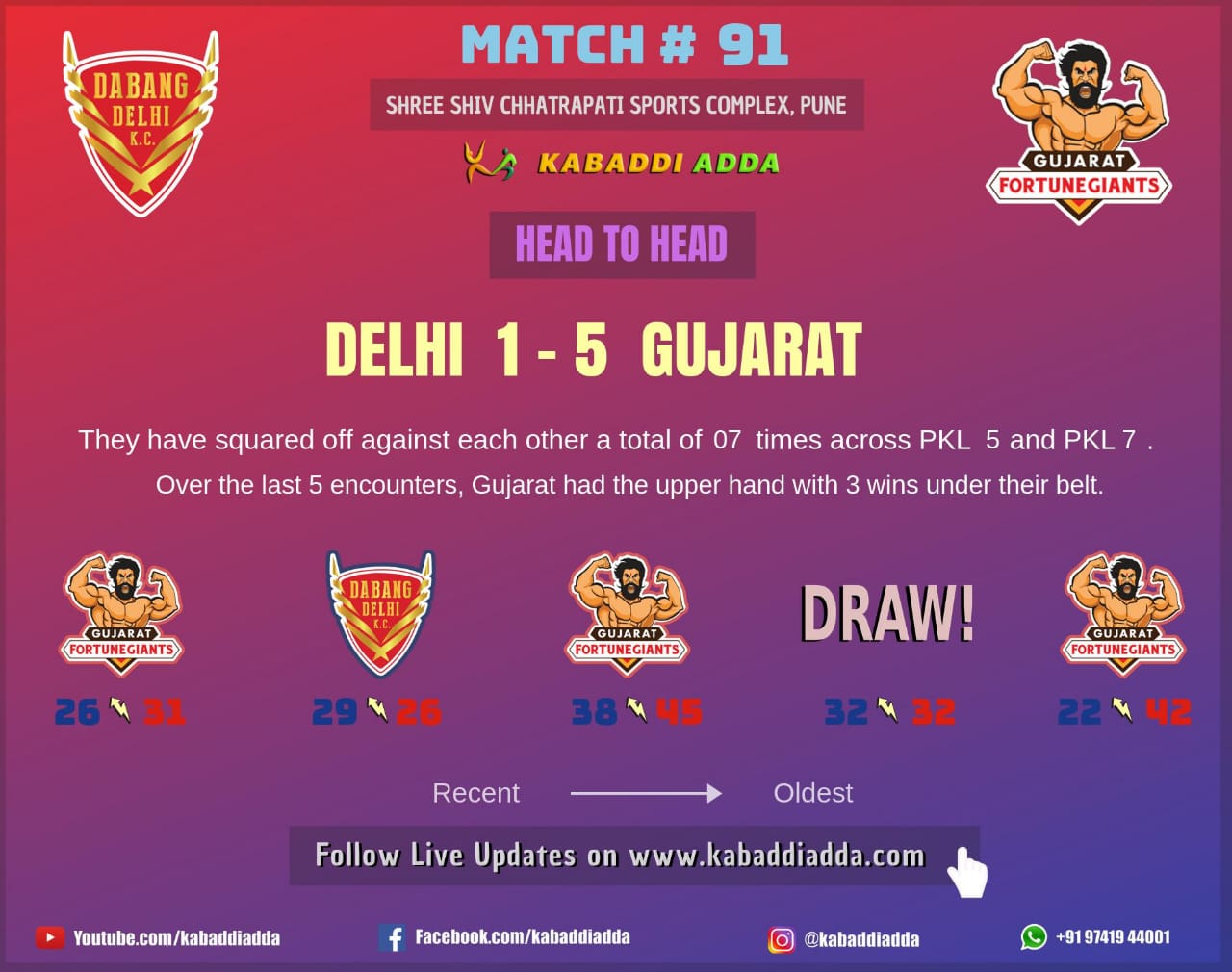