Top 5 Support Defenders that proved their mettle in the league stage of PKL 8. Read on for more information.

Support Defenders are often found playing a vital role in the defense on the mat as timely coordination among them can take down raiders of any calibre. Here's a list of top 5 support defenders that proved their mettle in the league stage of PKL 8. 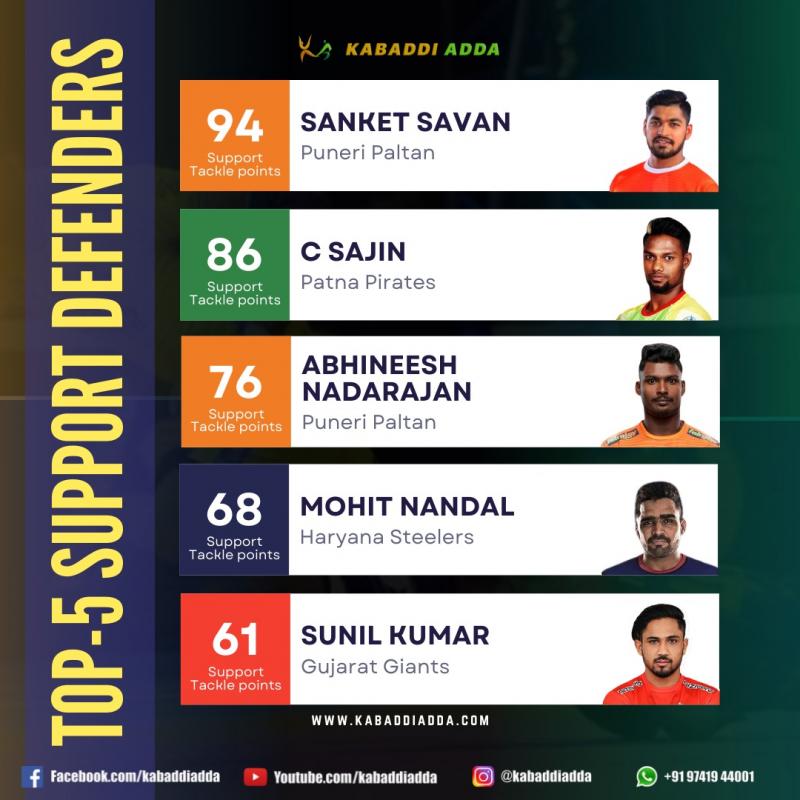 The performance from the Gujarat Giants was a result of some fine effort from the whole team. While there was no standout performer for the team in both the departments throughout the league stage, just the contribution from the players in crunch moments proved to be the main highlight for the Giants. Sunil Kumar, in the defensive department, provided good support to the likes of Parvesh Bhainswal and Girish Ernak, also scoring 44 tackle points for Gujarat. Sunil also contributed significantly as a support defender, making 61 support tackles for the team, succeeding on 52 occasions, thus playing a significant role in helping Gujarat qualify for the playoffs.

While Haryana Steelers had a decent season on both the raiding and defensive front, it wasn't enough for the team as they narrowly missed out on the train to the playoffs. But there were some really great performers for the Steelers throughout the season. In the defense, Mohit Nandal proved to be among the go-to defenders in the team. Mohit also provided adequate support to the likes of Jaideep Kuldeep and Surender Nada. As a support defender, Mohit made 68 support tackles, succeeding on 56 occasions for the Steelers. For someone playing his maiden season of PKL, Mohit had quite a good season for the Steelers.

Along with Sanket, another defender who had a wonderful season in the defense for Puneri Paltan was Abhineesh Nadarajan. The defender, playing at right cover, had a great start to the season as he scored a High 5 in his 1st game against the Telugu Titans. Even though Puneri Paltan struggled to perform well in the initial games, the player proved to be one of the standout performers for the team in the defense. Abhineesh also played the role of a support defender really well, as the player went on to make a total of 76 support tackles, succeeding on 57 occasions. Puneri Paltan ended up scoring 245 tackle points in the league stage, finishing just behind Patna Pirates.

Patna Pirates stood out in the league for their strong defensive unit. The team managed to top the standings in terms of no of tackle points scored in the league games, scoring 269 tackle points in 22 games. One of the primary reasons for this was the performance from the quartet of Shadluoi, Neeraj, C Sajin and Sunil Kumar throughout the season. C Sajin excelled really well as the support defender for the Pirates, succeeding in 70 out of the 86 support tackles made for the team. This proved to be a major boost for Patna as it helped the team to not only win the games convincingly, but also helped them to be the 1st team to qualify directly for the semi-final.

After what turned out to be a forgettable 1st leg for the Puneri Paltan, it was the defensive unit that stepped up in the latter half for the team. Sanket played a key role in reviving Puneri Paltan's fortunes in the 2nd half, as the player provided some brilliant performances as the support defender for the Paltan. In this season, Sanket provided 94 support tackles, succeeding on 74 occasions. Puneri Paltan, on the virtue of their strong defense, also inflicted allout on 32 occasions in the league stage. Sanket's performance in the defensive unit is a testament to Puneri Paltan's success as the team qualified for the playoffs this time around.