Top 3 Raiders and Defenders from Railways in PKL 8 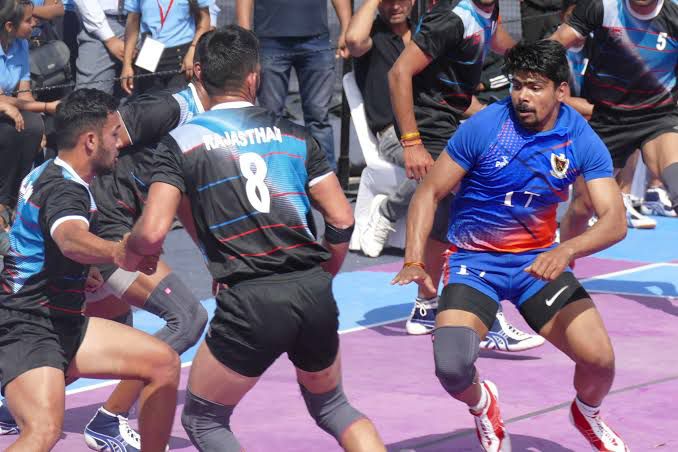 Every team has a star who shines brightly even during the darkest times. Such players, with their outstanding performance, steal the show and try to get better every day. From becoming the team’s crucial support to every fan’s last hope, these players always try to prove themselves. In this article, we shall talk about the Top 3 raiders and Defenders of the PKL Season 8. Note, these players are categorized according to the Indian Railways team. These players competed hand to hand in the nationals but got separated in the Pro Kabaddi League.

1. Pawan Sehrawat - Bengaluru Bulls captain Pawan Sehrawat has been the biggest star of PKL Season 8. He has topped almost all his categories with his outstanding performance. Even after playing as a raider, he managed to score a high 5 which is an important milestone of a defender. Pawan raided at an average of 12.67 points per match with 18 super 10’s, 244 successful raids, and maintained a strike rate of 64%. He has been playing for the Bulls for the past 3 seasons and managed to cross the 300 raid point mark twice. With 304 raid points in 24 matches and 320 points overall, he registered 6 super raids under his name and set out to be the most trustworthy player of his coach.

2. Vikash Kandola - From leading the team in Season 8 to scoring 180 points season, Vikash was always the ray of hope for the Steelers. He successfully raided at an average of 7.91 per match and scored 8 super 10’s in 22 matches. Overall, Vikash bagged 174 raid points, 143 successful raids and maintained a strike rate of 49% throughout the season.

3. Rajnish - Telugu Titan’s Rajnish has been with the team since his debut season. In his 3rd consecutive season, Rajnish scored 112 points in 13 matches with 106 raid points and 83 successful raids. His average rounded up to 8.15 per match which allowed him to register 6 super 10’s and 3 super raids under his name. Overall, he maintained a strike rate of 56% throughout the season. Telugu Titans had a rough season as they barely won any of their games. Despite that, Rajnish outperformed in all his matches, proving himself as a trustworthy player.

Defenders are like the pillars of the team. With their immense amount of patience, they bring forward some of the best tackles that the fans can ever witness. Now, we shall look at 3 such defenders from the Indian railways who have proved this.

1. Nitesh Kumar - Yodha’s right corner has been holding his position in the team for the past 4 seasons. Nitesh listed himself in the Top 10 defenders list of the season with 57 defense points and an average of 2.38 per match. He appeared on the mat 24 times allowing him to score 2 high 5’s and 4 super tackles. Nitesh maintained a 49% tackle strike rate this season.

2. Parvesh Bhainswal - Gujarat Giants picked up this player in the 6th season after looking at his performance. Parvesh has always been a star of the team in crucial times. He is generally seen with his partner Sunil Kumar on the mat. With 56 tackle points in 23 matches, 2 high 5’s, and an average of 2.43 per match, Parvesh ranked 9th in the top 10 defenders list of the season. Apart from that, Parvesh stood 1st in the super tackle list with 10 super tackles under his name. Overall his strike rate was 54% in the 8th season.

3. Sandeep Dhull - Sandeep just missed the Top 10 defender list as he finished 11th in the 8th season. He played 19 matches in which he managed to score 53 points for the Panthers. Sandeep had an average of 2.79 per match, 4 high 5’s, and a single super tackle under his name. Finishing the season with a strike rate of 42%, fans are looking forward to this player’s performance in the upcoming seasons.