Chandigarh makes it to the next round at Junior Kabaddi Nationals

Defending champions Chandigarh moved to the next round of the 46th Junior National Kabaddi Championships. They won both the group matches with victories over Goa and Jammu & Kashmir to top the group and secure a place in the pre-quarters. They are joined by Goa who won their only match against J & K. In what was an easy league stage for SAI, they defeated Delhi and West Bengal State Unit to have two wins and make a place for them in the next round. They have one match remaining against Odisha, who have lost both their matches earlier.

In the girls' group, Sports Authority of India and Haryana teams won both their league matches and made a place in the pre-quarterfinals. Zone A saw SAI defeating Delhi and Gujarat while Haryana went past Goa and Madhya Pradesh in group B.

The girls' teams from Maharashtra, Rajasthan, Himachal Pradesh, Punjab, and Tamil Nadu have topped Zones D, E, F, G, and H respectively and have comfortably moved to the next round of the tournament. The pre-quarters will see the top team from each group meeting the runner-up team from another group. 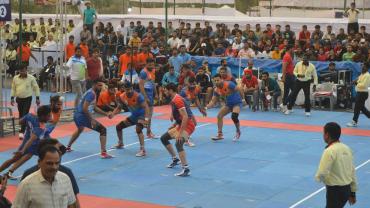