Dabang Delhi Kabaddi Club, the Delhi franchise of the Vivo Pro Kabaddi League is poised to give its fans an enthralling experience. The team, owned by DO IT Sports management will play their home leg, from 24th – 30th August, at the Thyagaraj Sports Complex, Lakshmi Bai Nagar, Delhi. Fans of the team will finally get the chance to see their favorite kabaddi stars, such as Joginder Narwal, Naveen Kumar, Ravinder Pahal, Meraj Sheykh, Chandran Ranjit and Vishal Mane live in action on their home turf.

Dabang Delhi KC kick off their home leg with a match against Bengaluru Bulls on Saturday. The team has already won 5 out of its 7 matches this season securing 29 points; earning them the second spot on the points table. “We love playing for the home crowd. Dabang Delhi KC had the best home leg compared to other teams in the previous season. We won 5 out of the 6 games we played. We intend to repeat last year’s success or in fact, better our performance this year. I’m counting on the loyal support of our fans to help us deliver winning performances this season. Dabang Delhi is not going to disappoint!”

Talking about Dabang Delhi’s aspirations for the title this year, Mr. Sumeet Yadav, Group CEO, DO IT said,

“The team is working as a cohesive unit. We have a balanced squad, with top notch raiders and strong defenders. We’re confident that this squad will do its best to take us to our maiden title this year. The unwavering support for the team is a huge motivational factor for us and we hope to have a great home leg this season.”

With an exciting 6 days of action slated to start on 24th of August, fans can look forward to Dabang Delhi’s electrifying performances. Those looking for tickets can find them on the PayTM Insider App or website. Tickets can be bought in advance online, or on the day of the matches at the box office at Thyagraj Sports Complex. 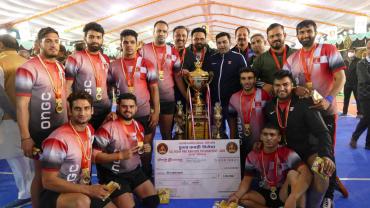