UP Yoddhas produced an all-round performance to defeat Gujarat Fortunegiants 33-26 at the Netaji Indoor Stadium in Kolkata on Monday. UP’s defensive pair of Nitesh Kumar (4 tackle points) and Sumit (5 tackle points) were in supreme touch, very well supported by the raiding duo of Shrikant Jadhav and Surender Gill (both with 6 raid points), as the Yoddhas beat last season’s runners-up Gujarat Fortunegiants to take the fifth spot in the points table.

Sachin was the lead raider for Gujarat, as he secured to a two-point raid in the sixth minute to give Gujarat a slender lead. Shrikanth Jadhav leveled things up immediately with a two-point raid for the Yoddhas as both sides continued to trade blows. In the absence of Monu Goyat, Surender Gill took the responsibilities on his shoulder to aptly support Jadhav in the raiding department. Gill pulled off a series of successful raids in the final minute of the first half to enforce an All-Out on Gujarat and open up a 7-point lead (16-9).

As anticipated, the first half turned out to be the battle of defenses with raiders struggling to clinch points in the early minutes.

Surender Gill started the second half just like he ended with the first, picking up vital raid points for the Yoddhas as they raced to a healthy lead. UP Yoddhas dominated the proceedings by inflicting second All-Out on the Fortunegiants in the eighth minute of the half to move to a twelve-point lead. Sachin reduced the margins for Gujarat with a four-point Super Raid as the Fortunegiants forced an All-Out on UP Yoddhas with 8 minutes still left in the match. UP, however, did not falter and the duo Nitesh and Sumit steadied their ship to secure their fourth consecutive win. Sachin was the lone warrior for Gujarat with 10 raid points followed by skipper Sunil Kumar with 7 points under his belt.

Shrikant Jadhav has been their star player in recent weeks for UP and could be the difference-maker today as well. Their defense also looks like a settled unit with skipper Nitesh Kumar and Sumit dictating the play. Return of Sachin Tanwar has come as a welcome boost to Gujarat's raiding unit in recent matches. Also,
skipper Sunil Kumar and Cover Parvesh Bhainswal will be looking for more consistency to keep their winning momentum going against the Yoddhas.

Head to head: UP Yoddhas vs Gujarat Fortunegaints 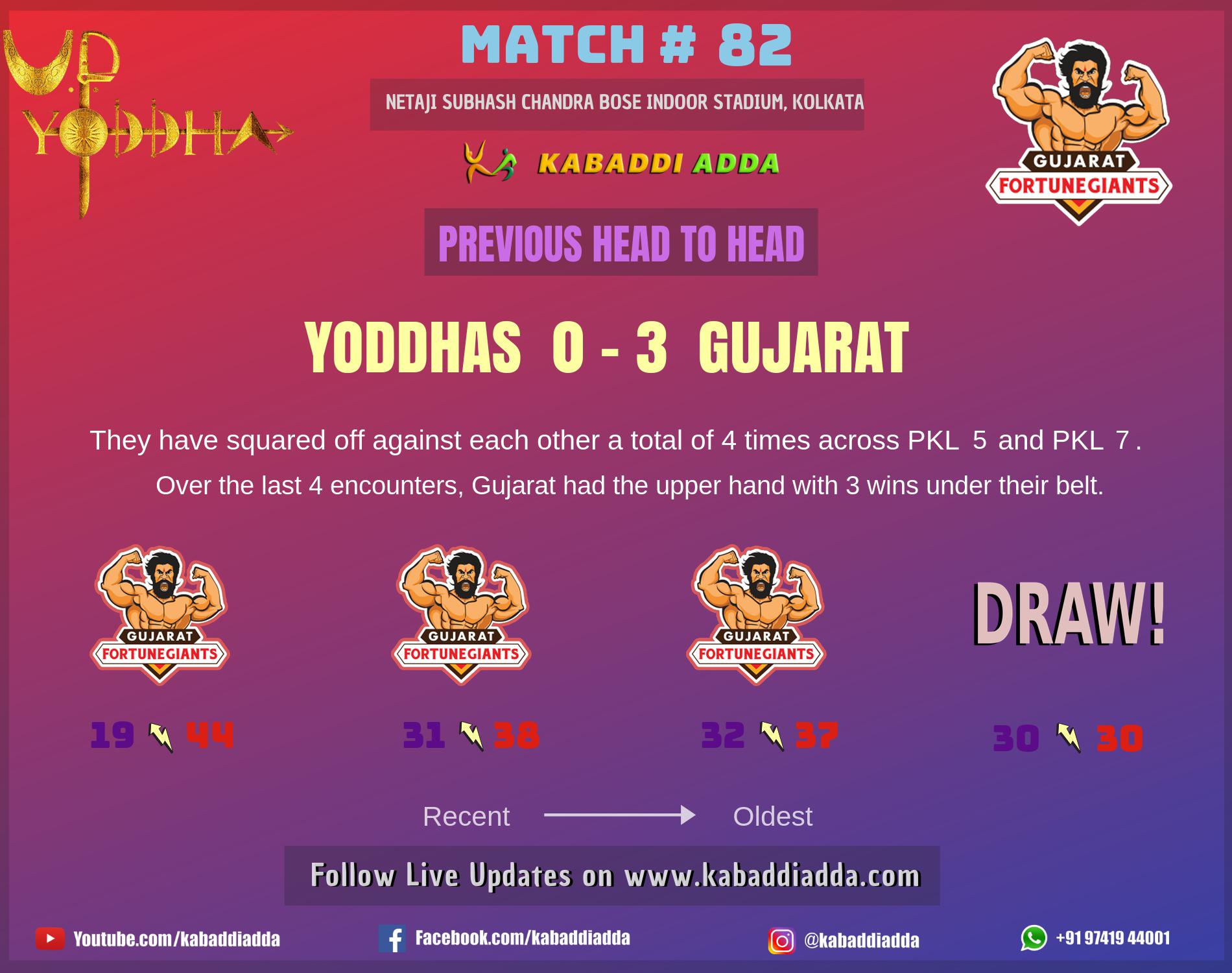