Aashish has never played a single national-level tournament before. Got his chance to showcase his skill at K7 Kabaddi Stage up 2021 and bagged his place in the league of big boys with Tamil Thalaivas. Read on to know more.

Kabaddi is a team sport where two teams fight each other through two halves. Hustling and bustling to come out on top. It is the collective effort that counts in the end but, some individuals
puts out such an effort that it leaves a mark on the spectators and opponents alike.

Especially if it's a defender, you are bound to watch them more eagerly. As some old-school pundits say, "Defending is a dying art we must play our part to save it" and one such player at K7 Kabaddi Stage Up 2021 was Aashish who s team Warriors Arena could not make it far in the tournament. But his performances helped him bag his spot at PKL season 8 with Tamil Thalaivas. 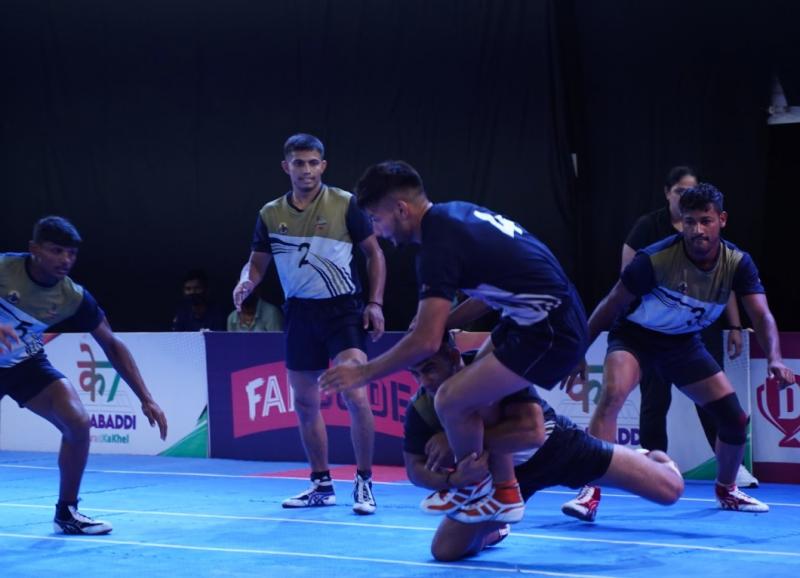 KA: - From when did you start playing kabaddi? Who was the first person to scout your talent?

Aashish: - I started playing from 2nd or maybe 3rd class. At the start, I used to follow the other kids from my village to play kabaddi and play it as a hobby. My first coach Mr. Sushil Shastri saw my talent and told me to come and practice with him if I wanted to play it professionally. And since then, I have followed him.

KA: - Growing up, there must have been many players you may have followed. But who was your role model growing up?

Aashish: - As I said earlier, I started very young, but as I got older, I started following many great players but if I have to mention one player, it would be Manjeet Sir. He is a fantastic player that I admire.

KA: -  Is there any from your family who also play the kabaddi like you?

Aashish: - No, it's just me for now, but in the future, you never know there could be more.

KA: - So Aashish, how were you scouted for PKL, your name was not there in the initial draft list, but still, you managed to bag a spot. Can you tell us how?

Aashish: - Yes, initially my name wasn't there on the list, so I had no chance. But luckily, the Tamil Thalaivas manager was present there at K7 Kabaddi Stage Up 2021 for scouting purposes. He saw my performances there and called me up for a camp. A week-long camp saw me perform even better and, the coaches got convinced to put me in the squad for PKL 8.

KA: - How did your family members react to the news of you getting picked up for PKL 8? Where they always supportive of you playing kabaddi?

Aashish: - My family was over the moon. Since I never got the chance to play in any national-level tournament, they always were a bit sad about that. But this news gave them immense pleasure and relief at the same time.

My parents supported me initially. But playing and practicing meant getting some injuries here and there. At that time, my family told me to focus on my studies and not on kabaddi. Well, I had some other ideas and here I am today.

KA: - PKL would be a platform that you have not got before, where you will rub shoulders with national and international players with and against yourself. How do you feel about such an opportunity given so early?

Aashish: - This is a big opportunity for me that doesn't come too often. I would give my 100% out there, train hard and show my teammates and coaches that I can be an asset to the team going forward.

Aashish: - My personal goal is to give 100% out there in training.
For a chance to cement my place in the first 7 lineups on the match day. It should be like I am playing a match and I have to perform at all costs.

KA: - What is your biggest strength as a player?

Aashish: - My biggest strength as a player would be my agility. For kabaddi players, it is very useful while attacking or defending. Since I am a defender my skill-based strength would be my dash. I have great confidence in my dash abilities.

KA: - Because of the PKL, you will have to stay away from home in a bio bubble. You will not be able to see your family nor eat your favorite home food. What are your thoughts on this?

Aashish: - Yes it is a bit unfortunate that I will be out from my home for a while. I will miss my homemade food as it is my favorite. But like every other player, I will also get used to it after a while. The pandemic has forced this restriction on all of us and, we will have to move forward with these safety measures in place.

KA: - What are your preparation for the  PKL 8?

Aashish: - Yes, I have been practicing more and more for this. I have been working on improving my speed and agility a lot. My defensive skill like chain hold and thigh hold are two skills that I have also added to my arsenal for PKL 8.

KA: - There will be a new transition for you. From being a starting 7 player every time to sitting out on the bench and wait for your turn. How do you see this?

Aashish: - Yes, the things would be different here. I will have to wait for my chance. But if I keep practicing hard, my coach will eventually give me my chance and, then it is up to me to grab hold of that.

KA: - How was your experience of K7? Do you think your performances here made the difference that ultimately got you at PKL 8?

Aashish: - K7 Kabaddi Stage Up 2021 was a wonderful experience for me. Competing against some national-level junior players of my age in a professional-like environment was a great experience. k7 was the place where I got scouted by my manager. So yes, it made a huge difference for me, or else I might have missed being a part of PKL 8.

How to play Kabaddi? Raiding Rules

How to play Kabaddi?- Mat Rules

Sahil Sultan makes his way to Tamil Thalaivas for the upcoming season 8 of the PKL.