Jaideep After some impressive performances for Bhaini School in the Inaugral edition of K7 Stage up 2021 makes it to the Pro Kabaddi season 8 as Haryana Steelers drafts him in for the season.

Every team has individual stars but, a better team needs to have some balance. A great attacking unit, as well as a good defending unit. Bhaini School seemed to have a squad full of talented players. As another player Jaideep, their left cover defender got snapped up by Haryana Steelers for Pro Kabaddi Season 8.

Jaideep has an excellent record in his overall young career as he has scored 95 tackle points out of 166 tackles attempted. He has an avg strike rate of almost 60 %. He is not only a brilliant individual tackler but, also has a 24 % Avg. Success Assists rate.

Here is a exclusive interview of Jaideep with Kabaddi Adda. 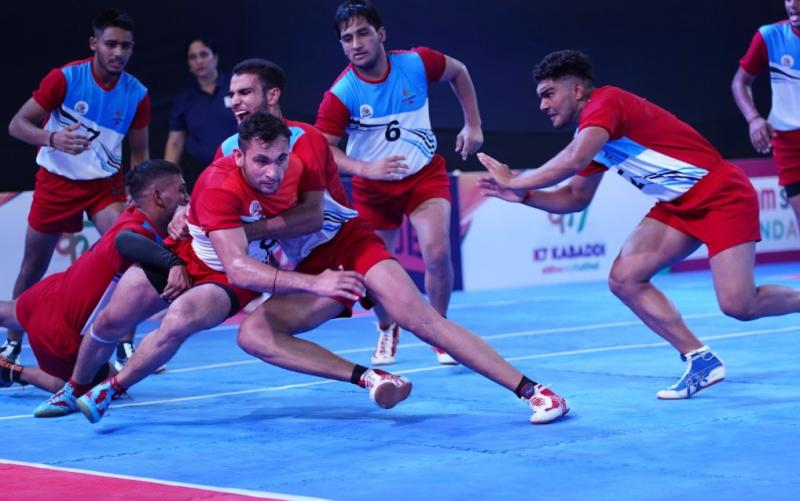 KA: - From when did you start playing kabaddi? How old were you then?

KA: - Growing up, there must have been many players you may have followed. But if you have to mention one single player, who would that be?

Jaideep: -  Sonipat has always been a land full of great players. Many players in the past as well as present have come up from here and made a name for themselves on the national stage. But my role model has always been Rakesh Kumar Sir, who is also the coach of Haryana Steelers team. I remember we used to look up to him when he used to play at the local tournaments, how does he raid, how does play out there on the field.  We were all curious about these things at that time.

KA: - Rakesh Kumar is now your coach too. How does it feel to you, you will get to play under your role model? There would be some nervous right?

Jaideep: - Even before the draft had begun. I prayed for this chance to play under the guidance of my idol, and it has come true. I would like, to thank the heavens for this. Yes, I am a bit nervous about it, but I am overjoyed, by the fact that I will get to learn straight from him and improve my game.

KA: - how many Nationals have you played so far?

KA: - How were you selected for SAI Team?

Jaideep: - Since I played the U-17 school games, I went for the SAI trails as they were held every year. There the Coach, Mr. Dharmpal sir, saw my game and thought that I had the potential to improve my game under his guidance and, that is how I got picked up for SAI.

KA: - So your game further improved after you joined SAI? But who was your coach before all that? Who gave you all the tricks of the trade during your initial days.

Jaideep: - Yes, my game improved a lot after I joined SAI. My basics got corrected, and I had more confidence after training regularly there. But my first coach was Mr.Narender sir, who was an x national junior player. He was the one that guided me during my initial days. Without him, I would not be there at the SAI in the first place. I am grateful to him for training and guiding me over the years.

KA: - Every player nowadays dreams to be a part of PKL 8? How were you selected for this as your name was not there in the NYP list?

Jaideep: - Yes, everybody today dreams of being a part of PKL. It is the highlight of any player's career, to be a part of a PKL franchise. My performances in the junior nationals caught the eye of the scouts and playing in K7 gave them another chance to look at my game.
And soon after few days of the Auction, I got a call that MR. Rakesh Sir has picked me up for Haryana Steelers for the upcoming PKL season 8.

KA: - Any other family member in your family that plays kabaddi besides you?

Jaideep: - Unfortunately not now. My big brother earlier used to play but, we had some family problems so, he could not continue with his game. He encouraged me to play as he said I was the better player he passed on the baton to me to make a name for myself in the field of kabaddi. And when I finally got selected for the PKL season 8, all my family members were over the moon. Especially my big brother was proud of my achievements and told me to work harder for the season ahead.

KA: - What is your personal goal for the upcoming season? How are you working on it?

Jaideep: - My personal goal is to quickly get gelled up with my fellow team members so that I could work with them on team combinations and variations. I need to work on my skills as well, this will help my teammates. I am looking forward to individual sessions with the Haryana Steelers coaches, to understand what aspects of my game are to be worked upon..

KA: - What is your strength and skill as a player that you are proud of?

Jaideep: - My Strength is my ability to get the best of the players around me. Since I am a cover defender I have to be as supportive as possible and my ability to perform my ankle hold from the cover position is something that I am confident and can easily pull off.

KA: - There will be a new transition for you. The bio bubble is something that you have not experienced before. You will be far away from your home. What are your thoughts on this?

Jaideep: -  Yes, this will be something new for me and the rest of the rookie players out there in PKL. Bio bubble is a concept we need right now for the safety of everyone. But the management has made all the arrangements here to the point. There is everything that has been taken care of here for the players and support staff. Just like the food here feels like we are eating food sent from our home which is great for me. Practise is the main goal here and if the food is appropriate everything is set for me then.

KA: - How was your experience of K7? You were there as the main defender of your team? But here, you came in as NYP and, chances would be few and far between here. So how prepared are you for this challenge?

Jaideep: - Here I will have to start form the scratch. I am a new member and my teammates barely know me. I will have to work hard than the rest of the group to get a look in, this is a challenge I am fully aware of, but the coaches have assured everyone that people will get their chances so, I just have to keep working hard and wait for my moment to come.

KA:- You already have many skills under your belt, but is there any specific skill that you have been working on or would like to work on?

Jaideep:- I am looking forward to the coach's evaluation of my game. Firstly we have a fitness camp to look forward to then I would like to improve on my diving skills and overall gameplay so that I could be an all-around type of player who could help his team.

KA: - How was your experience with K7?

Jaideep:- K7 was a platform that was much needed for players like us. We now have another route to go into the pro circuit. Because of this players like me now have a platform where we can showcase our skills against other national-level players vying for a place at the pro circuit and I hope this keeps on growing. As because of this I got my chance to be at PKL 8 and many others in the future will have a similar chance if they work hard.

KA: - has there been a time when you were demotivated and thought that this is hard to continue and I should leave.

Jaideep: - Yes there was a time a few years back when I was having constant injuries in my knee and back. I was getting fed up with it and thought enough is enough. But at that time my coach was very supportive of me. He said to hold out on this phase as the path ahead is long but will be rewarding. Thank god I listened to him and today here I am. I can now keep working on my dream to be a national player who represents his country.