Naveen, Left Corner defender from Butana Village in Sonipat was part of the K7 Qualifiers, Haryana. He was the lead defender for Neer Gulia Kabaddi Academy. Read on to find out about his journey and performance in K7 qualifiers.

Naveengrew up in Butana, a small village in Sonipat. He is a left corner defender and looks up to  Ravinder Pahal as his inspiration. He represented Neer Gulia Kabaddi Academy in the K7 Qualifiers, Haryana. Naveen was the lead defender for his team.

Unlike most Kabaddi players, Naveen got into Kabaddi just 4 years ago. Naveen started his Kabaddi journey in his school where a lot of other kids used to play Kabaddi. His uncle, a wrestler used to practice wrestling at an academy in Sonipat, the same place where Neer Gulia Kabaddi Academy is situated. He suggested Naveen enroll himself at Neer Gulia Kabaddi Academy under the supervision of Coach Neer Gulia. Naveen started working hard on his game to become one of the top defenders in his age group. His ultimate dream is to represent the Indian Kabaddi team.

Click here to get information about Neer Gulia Kabaddi Academy

In their 2nd match, Neer Gulia Kabaddi Academy faced off against Warriors Arena Kabaddi Academy. This match turned out to be one of the closest matches in the tournament and it also ended in a tie. Naveen once again finished the game as the best defender for NG Kabaddi Academy. Naveen scored 5 tackle points in the match. Match ended with scores of 38 apiece for both teams.

Neer Gulia Kabaddi Academy failed to make it to the next round but Naveen had a great tournament where he showcased his talent as a top left corner.

When asked about the experience of playing K7 Qualifiers, he said

''It was a great privilage for me to participate in the K7 Qualifers Tournament, it is a very good platform for young players like me to come out and show the world my game and skills''.

We wish Naveen the best and hope to see more of him in the coming years. 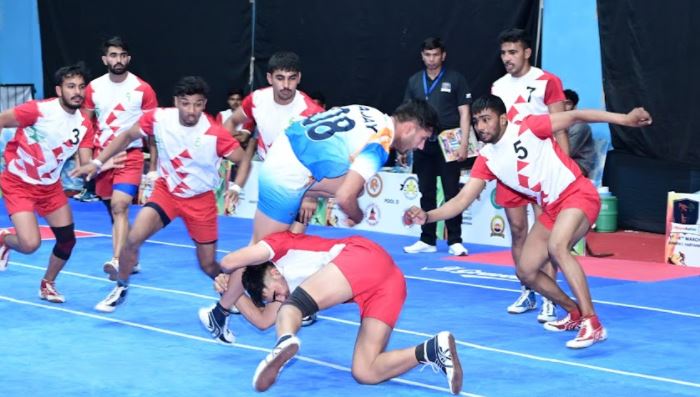