Rahul, a young Kabaddi talent from Ahri Village, Jhajjar district, Haryana. Rahul represented BBD Kabaddi Academy in K7 Qualifiers. He trains with Surender Nada and considers him as his guru. Read on to find more about Rahul and his performance in K7 Qualifiers

Rahul was born and brought up in a village named Ahri in Jhajjar district, Haryana. The same place where star defender Surender Nada is from. In fact, it was Nada who introduced Kabaddi to Rahul. Like any other youngster, Rahul was introduced to Kabaddi at a very young age. He was 14 when he stepped into the Kabaddi ground for the first time under the watchful eyes of Surender Nada. Rahul began as a left corner defender and was recently seen in action for BBD Kabaddi Academy during the K7 Qualifiers. Like Nada, Rahul is also a left corner defender. He comes from a family of Kabaddi players where his two elder brothers have played district-level Kabaddi in Haryana.

Rahul's talent did not take much time to be seen by everyone around Ahri. People who saw his game insisted him to pursue Kabaddi as a career. Soon Rahul took the sport seriously and started working hard on his game. He has represented Haryana in the CBSE Clusters 2018-19, a national school event in India. Rahul looks up to his guruji, Surender Nada who is his inspiration. His ultimate dream is to play for the Indian Kabaddi team. Rahul's favorite Kabaddi players are Surender Nada and Anup Kumar.

K7 Qualifiers was one event where we got to see Rahul's game and, he did impress everyone with his defense skill. He was the left corner for BBD Kabaddi Academy, Gurugram. Rahul had a tournament to remember as he finished as the 2nd best defender with 18 tackle points to his name in 3 matches.

Rahul started his K7 campaign vs AAA Kabaddi Academy. He was on song from the word go. He scored 6 tackle points in the game where he was also seen tackling AAA academy's best Raider Ashu on multiple occasions. In the 2nd game of the tournament vs Narwal Golden Club, Rahul was again BBD Academy's best defender in the game as he scored 6 tackle points in 9 tackle attempts. In the third and final game against the hosts Khokhar Kabaddi Academy where he once again finished the match with 6 tackle points to make it a hat-trick of 6 points in the tournament. Overall Rahul had a great tournament where he was seen pulling off each defense skills with ease. BBD Kabaddi Academy did not have a tournament to remember but, won the hearts of everyone with the fighting spirit and character. Rahul was their defender who was at his very best.

When we asked about his experience of playing K7 qualifiers he said:

''K7 Qualifiers was one of the best tournaments that I have been part of, it is a great opportunity for a youngster like me and many others who are waiting for a chance to express their skills in front of people.''

We wish Rahul all the best in his career and we hope to see more of him in the coming future. 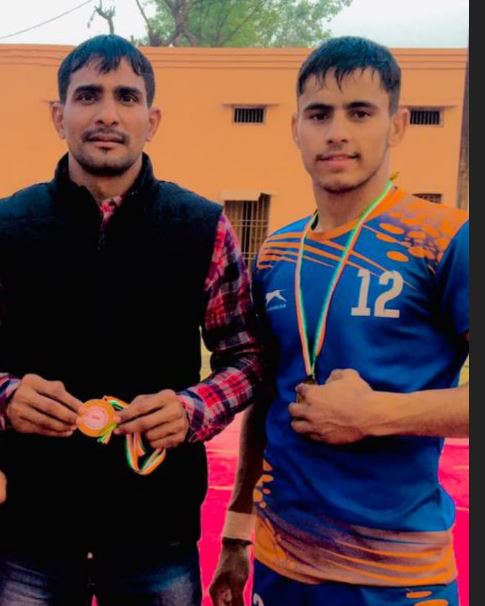