Ashu, a young Kabaddi player from a small village in Sonipat named Khanpur Kalan. He was part of the K7 qualifiers, Haryana where he was the lead raider for AAA Kabaddi Academy. Read on to find out his story and his performance in K7 qualifiers.

Ashu was born and brought up in a small village near Sonipat called, Khanpur Kalan. Haryana and especially Sonipat are the hub of Kabaddi in the country. It is not surprising to see the number of Kabaddi players who come from this region. He is famously known as Baaliwala in the region because of the ''Baali'' he wears on his ears from a young age. He was last seen in action during the K7 qualifiers tournament where he played for AAA Kabaddi Academy- Academy started and run by Amit Hooda.

Ashu, like everyone else got involved in Kabaddi as young as 10-12 years old. He used to visit many grounds around Khanpur Kala to watch his elder friends play Kabaddi, which is where the interest began. Soon, Ashu's school had built a Kabaddi ground, thanks to Brijender Singh Malik, the school principal who was the main man behind the idea. This marked the beginning of Ashu's Kabaddi journey. His game grew rapidly under the eyes of Joginder Malik and Ranvir Singh. Joginder was the sports teacher at the school and Ranvir Singh was the Kabaddi Coach. Ashu owes everything to his coach Ranvir Singh and the mentors- Joginder Malik and Brijender Singh Malik. Ashu started participating in panchayat tournaments and won a lot of them, his coach Ranvir Singh insisted that he works hard and asked him to pursue Kabaddi as a career. From there on Ashu worked hard on his game and kept growing as a player. Ashu started as a defender donning the Right Cover Position, but soon his raiding skills grew, and today he is one of the leading raiders in his age category from the state. He has represented Haryana in the Sub-Junior Nationals 2016 and SGFI school games in 2019.

Ashu spoke about how Pro Kabaddi League played a major role in inspiring him to become a better player, watching his inspiration Rakesh Kumar play was the key to decide Kabaddi was everything for him. Ashu dreams to represent India one day in the Asian Games and winning the gold medal for his country is his ultimate dream. When asked about who his favorite player is- Ashu mentioned he has two favorite players who he enjoys watching- Rohit Kumar and Maninder Singh.

We got a glimpse of Ashu's game when he represented AAA Kabaddi Academy (Academy run by Amit Hooda) in the K7 qualifiers tournament. He was the key player for his team and was often seen as the lone warrior in the raiding department. He had a dream tournament, finishing as the 2nd best raider overall and the best raider of day in the final day of the tournament. Ashu scored 52 raid points in the 3 matches he played, just 3 points behind the tournament topper Parteek Dahiya.

Ashu started off his K7 qualifier journey against BBD Kabaddi Academy, and he was at it from the word go. He kept scoring points at regular intervals and ended the match with 20 raid points in 25 raids to help AAA Kabaddi Academy win the game by a huge margin of 26 points. He continued his good form into the next game against Khokhar Kabaddi Academy where he scored 13 raid points in the game. He was the only one firing in the raiding department as AAA went down crashing to Khokhar Kabaddi Academy by 9 points. In the third and final match for AAA Kabaddi Academy, Ashu was again at his best and this time it was even better as it came in a crucial match for AAA. He scored 19 raid points in 28 raids to help AAA beat Narwal Golden Club in a game where AAA were behind through out but in the final moments pulled off a marvelous come back. Thanks to Ashu, who was at his very best to help AAA come back and win the game. K7 Qualifiers for Ashu was nothing short of a fairytail but be assured that this is just the bigining. It will be super exciting to see how Ashu takes his game forward in the years to come.

When asked about the experience of K7 Qualifiers he said:

''K7 is a very good platform for young players like me and I had a good tournament for AAA Kabaddi Academy, It will be very good if I get more support from the other raiders in the team which will take some pressure off me and I can perform even better and help my team win.''

Next Ashu will be seen raiding again for AAA Kabaddi Academy in the K7 stage up, which is set to take place in July. It will be interesting to see how Ashu will go about his game after a long gap. 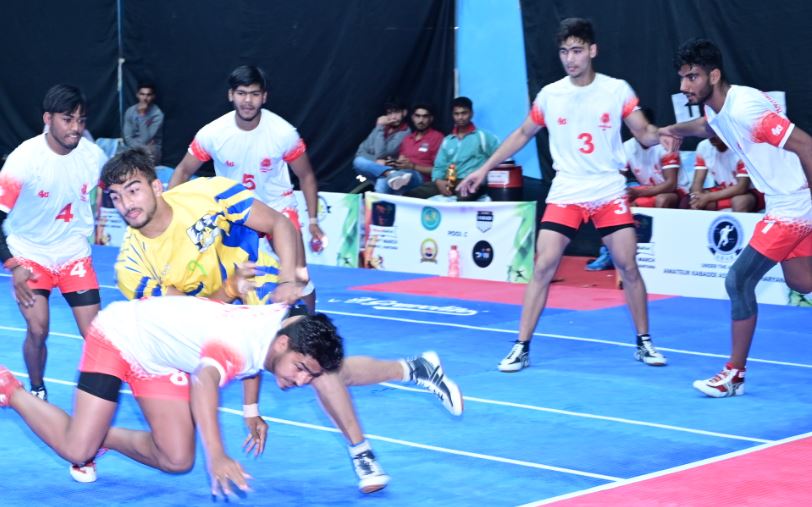