K7 Qualifiers, a premier Junior Kabaddi tournament which took place in Sonipat, Haryana in the month of March 2020 which had 16 Kabaddi Academies go head to head against each other. Here are the top 5 raiders who stole the show in the tournament. 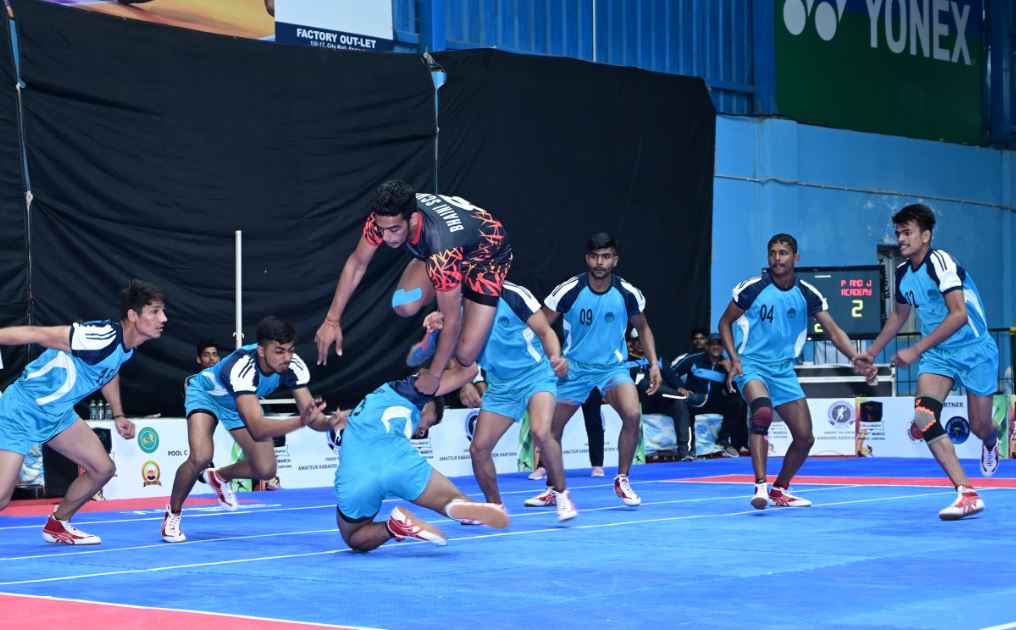 Click here to see the player rankings from K7 Qualifiers

Parteek Dahiya, a young right raider from Rohtak Haryana represented the Deepak Niwas Hooda Foundation in the K7 Qualifiers, Haryana. Parteek managed to score 55 raid points in just 3 games in the tournament. He was on song from the word go and played an important role in DNH Foundation's unbeaten triumph in the K7 Qualifiers.

In the next encounter, DNH Foundation went up against Kathura Stadium in the 2nd match of the tournament. Parteek again was on song from the word go. Kathura defense did not have an answer for Parteek as he scored 20 raid points in 24 raids to make it two back-to-back games with 20 raid points or more. Kathura Stadium was blown away by DNH foundation with scores of 67-23.

Ashu, fondly known as Balliwalla by his mates because of the earring he wears from his childhood. He is an athletic Right Raider who keeps defenders at their toes with this raiding skill. Ashu was seen in action for the Amit and Ashok Kabaddi academy in the K7 Qualifiers, Haryana. He scored a total of 52 raid points in 3 games for his team. He was the lone warrior for the AAA Kabaddi academy in all 3 games. Ashu is one of the key reasons why AAA Kabaddi Academy won hearts and made it to the K7 Stage Up as the Wild Card entry team.

Mohit Goyat, a young raider from the Bhiwani district of Haryana- the same village and academy where star raider Naveen Kumar is from. Mohit is a right raider who was seen in action for Bhaini School Kabaddi Academy in the K7 Qualifiers. He was also the lead raider for Haryana in the 47th Junior National Kabaddi Championship. Mohit finished the K7 Qualifiers with 49 raid points to his name to help Bhaini School win 3 out of 3 games.

In the first game, Mohit Goyat's Bhaini School went up against Ch. Ram Swaroop Kabaddi Academy. Mohit was in great form from the start of the game. He finished the game with 15 raid points to his name. This game turned out to be one of the closest games in the tournament, Bhaini School just got better of Ch. Ram Swaroop Kabaddi Academy with scores of 36-35.

In the 2nd game, Bhaini School went head to head against Narwal Kabaddi and Sports Academy. Mohit Goyat produced one of the best performances in the tournament. He finished the game with a massive 24 points to his name. Mohit's 24 points did not allow Narwal Kabaddi and Sports Academy to come back in the game. Bhaini School went on the win the game with scores of 56-30.

In the 2nd game of the tournament, BBD Kabaddi Academy went head-on against Narwal Golden Club. Mandeep again produced an amazing performance for his team. He scored 12 points in 23 raids to finish as the best raider for BBD. But NGC went on to win the game with scores of 46-35.

Surender Gadhwal a young raider from the Bhiwani district of Haryana was seen in action for Chhaju Ram Kabaddi Academy in the K7 Qualifiers, Haryana. He is a right-left raider for his team, a type of raiding which is seen as a rarity in the sport. In the K7 Qualifiers, Surender was in great form, he scored 30 points in 3 games to help his team qualify to the K7 Stage Up.

In the first game of the tournament, Surender Gadhwal started his K7 Qualifiers with 8 points to his name against a very strong Deepak Niwas Hooda Foundation team. But this was not enough to beat the DNH Foundation as Chhaju Ram Kabaddi Academy went down crashing with scores of 53-28.

In the 3rd and final game, Surender played a crucial role to help Chhaju Ram Kabaddi Academy qualify for the K7 Stage Up. He scored 13 points in the 19 raids he went for. Chhaju Ram Kabaddi Academy comfortably won the all-important game with a score difference of 20 points. They beat Kathura Stadium with scores of 54-34 to make it to the next round of K7 Tournaments.